A little over 50 per cent of the population in Telangana resides in its urban areas. In fact, migration to urban areas from rural areas has been steadily increasing over the years. In addition to urbanisation, scanty and erratic rainfall often results in the depletion of groundwater levels, in turn, leading to reduction of storage in the surface reservoirs. “Dependence on groundwater has been increasing rapidly over the past two-to-three decades. Indiscriminate use of groundwater is resulting in a steep fall in its levels and a reduction in yield,” said J Satyanarayana, joint director of RWH Wing, HMWSSB.

Satyanarayana, in his in-depth article on rainwater harvesting, says that open areas available in cities are very little due to the high percentage of built-up area. This, in turn, has been reducing the recharge capability of rainfall. In the article, he suggested some of the best ways of rainwater harvesting in urban areas, namely, through the direct collection of rooftop rainwater and groundwater recharge.

Rooftop rainwater may be collected and stored for further use after filtration by the construction of a sump on any premises. It can be recharged by constructing various types of artificial recharge structures to augment the groundwater on the premises of independent houses, multi-storied buildings, apartments, gated communities, office premises, institutions and colleges. The type of structure may be designed on the basis of the type of soil, geology, depth of weathered zone, depth to water level, recharge area of the buildings, among others.

Satyanarayana added that the HMWSSB has been insisting applicants of water connections to construct rainwater harvesting structures on the premises of their homes, where the plot area is 200 sq metres
and above.

It is observed that most of the residential welfare associations (RWA) are not taking enough measures to maintain rainwater harvesting structures in their respective areas. “In view of this, the general managers of O&M divisions of the water board are advised to insist the RWAs to carry out regular maintenance of the structures to sustain the structures for a long period,” Satyanarayana said

The HMWSSB has taken up an innovative programme, namely, Jala Varasatvam, by involving senior citizens, federations, residential welfare associations, self-help groups and others. Around 1,600 Jala Varasatvam clubs were formed in Hyderabad with the help of NGOs in 2018. “Under Jala Varasatvam, as many as 2,000 rainwater harvesting structures were constructed by owners of buildings, under the technical guidance of 14 NGOs and the water board in 2018,” Satyanarayana said

185 GALLONS CAN BE RECHARGED

A total of about 7,067 rainwater harvesting structures were constructed by the water board under various programmes. Different departments like HMWSSB, GHMC, HMRL, CDMA and TSIIC and several individuals were involved in the initiative. Structures with a volume of about 58,588 cubic metre were built, through which about 8,41,425 cubic metre (185.66 million gallons) of rainwater can be recharged per year 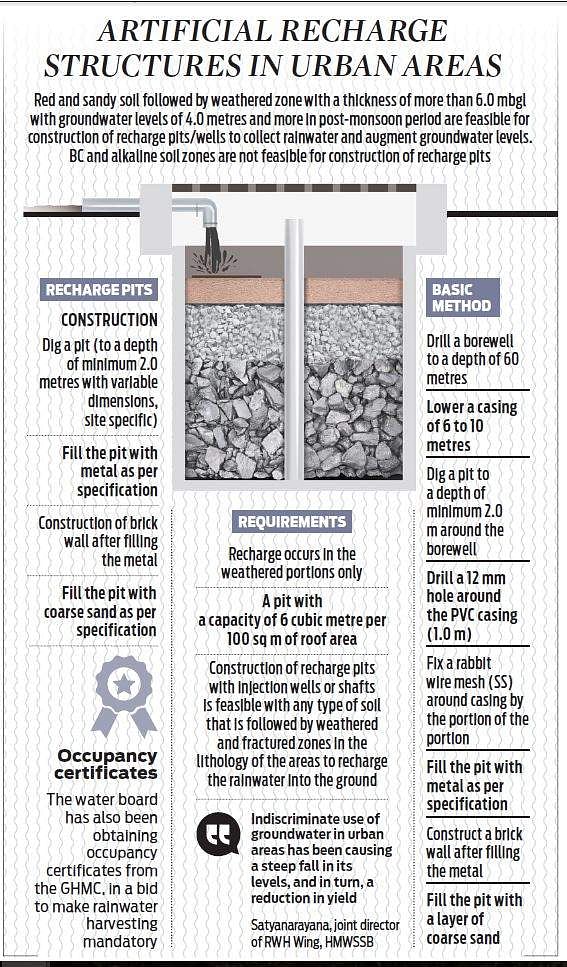