Employees fear that once the hospital facilities are shifted, the entire building will be provided to the Nizamia Unani Hospital.

HYDERABAD: The bustling streets of Charminar area for over a week have been privy to disappointed and tormented patients who are being turned away from the Government Ayurveda Hospital, as the hospital has received orders to shift to Erragadda.

Citing the dilapidated condition of the building, authorities have claimed that the shift is only temporary as renovation work will start soon, however, sources claim that multiple sanctions of funds have lapsed and the renovation work is yet to start. Employees fear that once the hospital facilities are shifted, the entire building will be provided to the Nizamia Unani Hospital. Patients have also tweeted about this to TRS party leader, KT Rama Rao. 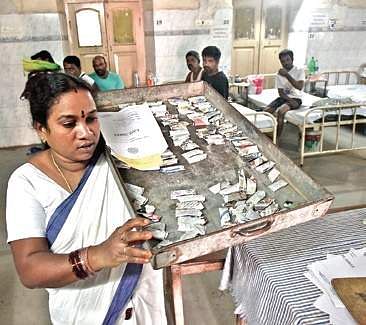 The hospital caters to over 200 OPD patients. Dr Ch Chandrashekhar, principal of Government Ayurvedic Hospital and Research Centre, Erragadda, said, “Yes, the shift is definitely temporary. We understand that a large chunk of patients will be affected and therefore, a couple of beds will still be available in the hospital for emergency purposes. The staff and infrastructure will resume service there once the renovation is done.”

However, patients come to this hospital every day requesting the authorities not to shift the hospital, as Charminar is more accessible for the people of Old City. Narender Singh, a patient who is admitted in the hospital, showed Express his tweet to KTR that read, “Today, no treatment done in Govt Ayurvedic Hospital, Charminar. The reason given is shifting to SR Nagar.”

The walls of the hospital sport graffiti that say “shift the hospital”. The ceiling of the decades-old building is peeling off and pieces have already crumbled over the patient’s beds. The in-patient wards with 75 beds are dimly lit with only two CFL bulbs and two tube lights. The fans barely work. The staff has claimed that, in an attempt to force them out, the electricity supply has been cut to one of the surgical wards that deals with patients suffering from piles and fistula. The maternity ward has also been shut down here.
The Director of the state department of Ministry of Ayush, Dr S Varsini, also filed a memo recently asking the employees not to talk to media regarding the condition of the hospital as it paints a bad image of the hospital and department.

A source, choosing to be anonymous said, “Rs 3 crore was sanctioned in 2009-10 for the renovation of the entire infrastructure. However, due to administrative setbacks, it was not used and finally lapsed.