How AIMIM became invincible in Hyderabad

As expected, AIMIM fared better in the Old City, than in Vikarabad, Tandur and Chevella, which were making the competition for AIMIM fiercer and margins, narrower.

HYDERABAD: AS one-sided as the contest for the Hyderabad Lok Sabha seat seems to be in the upcoming General Elections, it was not always a clean sweep for the All India Majilis-e-Ittehadul Muslimeen in the past.

The Parliamentary Constituency, which now comprises Malakpet, Karwan, Goshamahal, Charminar, Chandrayangutta, Yakutpura and Bahadura Legislative Assembly constituencies, was earlier a Congress bastion. Prior to the grand old party, during the 1952 general elections the leftists dominated the political scene -- not just in the Old City but in the whole of Hyderabad.

The 1952 Hyderabad Legislative Assembly elections, which were held in the aftermath of the armed struggles for Telangana, showed that the Muslims of Old City had dominantly voted for the leftists and the Communist-led People’s Democratic Front which won two constituencies in Old City.

However, in 1957, the disappointment of the Old City citizens at the inefficiency of the communists led it to switch loyalties to the Congress. The formation of Andhra Pradesh state also ignited hope among citizens that the Congress-led government would redress their grievances.

In 1962, the MIM which was banned after the accession of erstwhile Hyderabad State for carrying out a genocide in the region, re-entered the political frame eyeing to capture the split Communist voter base. Though in that year’s general elections it made an incursion into Congress’ vote and could not fully succeed in consolidating the minority vote.

Experts note that it was in 1967 that the electoral battle was polarised, more so, with the entry of the Jana Sangh Party, which went on to appeal to the majority voter base. It is evident in the result of the 1977 elections, held during the last phase of Emergency. Though Congress had won the Hyderabad Parliamentary seat, the MIM maintained its lead in all the Old City constituencies except Karwan.

The polarisation also started affecting the communal harmony in Hyderabad with any minor incident involving a disagreement with members of two communities snowballing into a full-fledged riot. These riots, first of which occurred in 1978, were observably occurring around the dates to elections to Lok Sabha, State Legislative Assembly and Municipal Council. Reports claim between 1978 to 1985 there were 14 incidents of communal riots, mostly concentrated in the Old City, which killed over a 150 people.
The political scale shifted in 1984, when AIMIM’s fomer chief Sultan Salahuddin Owaisi won the Parliamentary Seat seat as an Independent and with a narrow margin of 3,481 votes.

As expected, AIMIM fared better in the Old City, than in Vikarabad, Tandur and Chevella, which were making the competition for AIMIM fiercer and margins, narrower.

Delimitation of constituencies in 2008 saw the exclusion of Vikarabad, Tandur and Chevella from the Hyderbad LS seat, with majority segments under the AIMIM’s influence. In the last Assembly elections, the MIM retained six of the Assembly constituencies falling under LS seat with the lone exception of Goshamahal, which went to BJP’s Raja Singh.

Where it all began 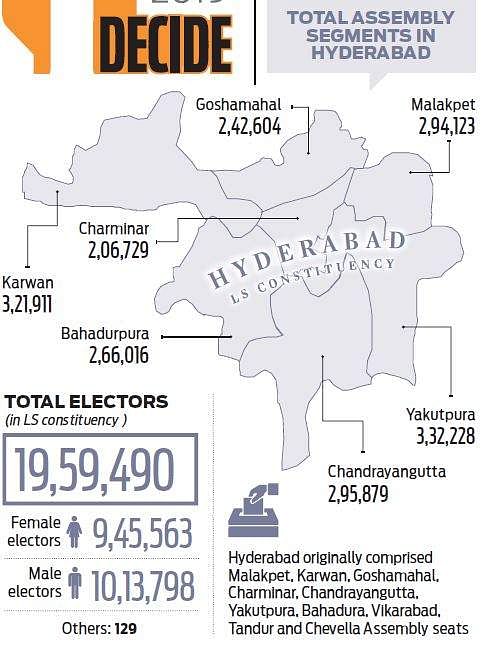