This June 8, on the occasion of distribution of fish ‘prasadam’ in the city, the Bathini brothers are expecting an increase of over one lakh persons as compared to last year.

HYDERABAD: This June 8, on the occasion of distribution of fish ‘prasadam’ in the city, the Bathini brothers are expecting an increase of over one lakh persons as compared to last year. While four lakh people visited them last year and took the ‘prasadam’, said to be of medicinal nature to cure asthma, they are expecting five lakh persons from across the country this year. 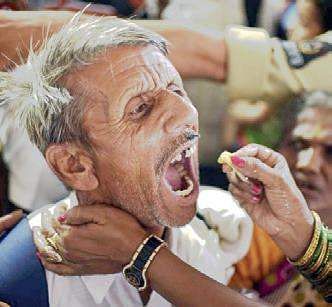 In view of this, they will be preparing 50 quintals more  ‘prasadam’. Last year, they had distributed 450 quintals of the ‘prasadam’. The Bathini brothers have been administering fish ‘prasadam’ to asthma patients since 1845 free of cost on Mrigasira Karthi day, which marks the onset of monsoon according to Hindu calendar. The fish prasadam would be distributed at Exhibition Grounds in Nampally from 6 pm on June 8 to 6 pm am on June 9.

Addressing a press conference here on Wednesday, Bathini Harinath Goud, along with his family members, said that every year asthma patients are increasing in the country which he attributed to rise in ‘air pollution’. As the fishlings for the ‘prasadam’ is supplied by the fisheries department, patients need to buy the fishlings at the venue, he said. For vegetarian patients, ‘prasadam’ will be administered along with jaggery free of cost.

Now we are on Telegram too. Follow us for updates
TAGS
Fish Prasadam