NCW chairperson Rekha Sharma called for exemplary action by the police and judiciary against those guilty.

NEW DELHI: The National Commission for Women (NCW) on Friday constituted an inquiry committee headed by a member of the commission to look into the incident of a woman veterinarian who was reportedly set on fire after being sexually assaulted in Telangana.

NCW chairperson Rekha Sharma called for exemplary action by the police and judiciary against those guilty. 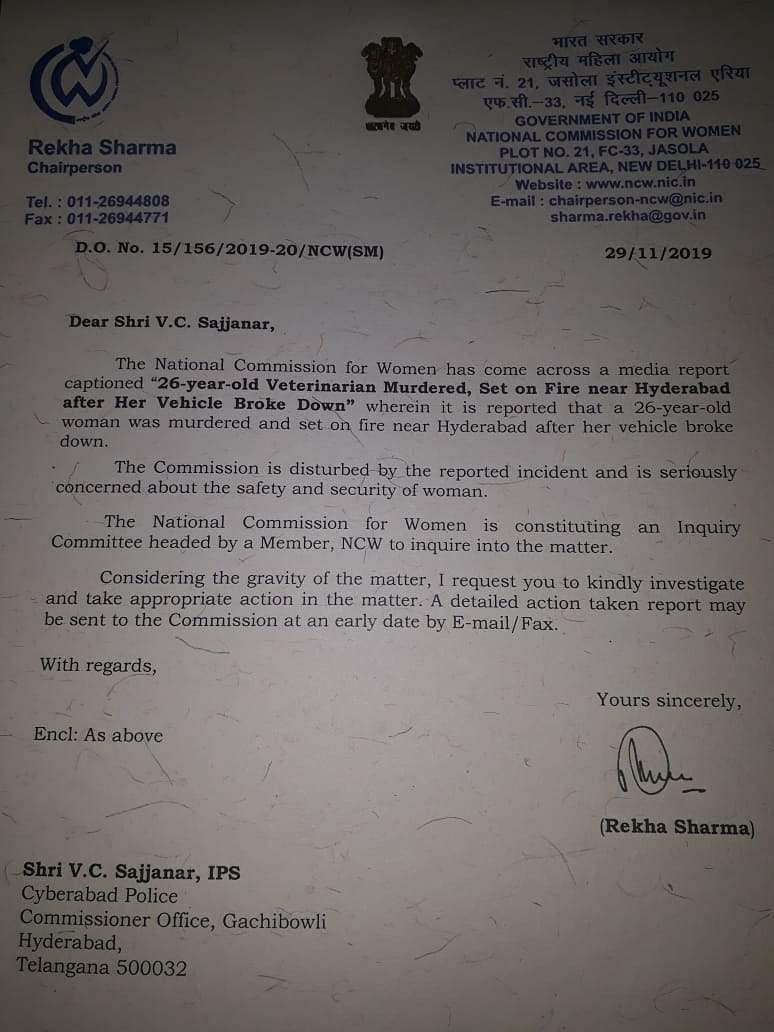 "The police and judiciary should act with an iron hand against those found guilty in the case. A member of NCW will be sent to Hyderabad today evening to help the family and ensure quick action in this case," Rekha Sharma told ANI.

"It is shameful if women cannot get security in a city like Hyderabad where women go in such large numbers to work from other areas of the country," she added.

She has also written to the Hyderabad Police urging them to take appropriate action in the case.

The burnt body of a veterinary doctor was on Thursday found at Shadnagar outskirts in Telangana's Ranga Reddy district. The body was later identified as that of Disha.

As per the preliminary probe, the police suspect that the doctor was sexually assaulted.

"We received a complaint in Shamshabad Rural Police Station from her sister. Disha working as a veterinary doctor at Kollur had gone to a hospital for treatment and while returning her vehicle's tires got punctured. Today morning Disha was found brutally murdered and burnt at Shadnagar outskirts," ACP of Shadnagar, V Surender had said.

Narrating the ordeal, the victim's sister said, "Last night I spoke to her and she told me she is scared and later when I called her phone was off. We searched for her but we could not find anything so later we filed a complaint in the police station."

A case has been registered under relevant sections and further probe into the matter is underway.

More from Hyderabad.
Now we are on Telegram too. Follow us for updates
TAGS
Hyderabad doctor murder National Commission for Women