HYDERABAD: As you enter the room at Aurora’s Design Institute, Habsiguda, you stumble upon incomplete works done in straw. What appears to be an endless loop of atomic models straight out of a Physical Chemistry notebook is actually a design prototype. “That’s where mathematics meets art,” chimes 34-year-old architect Takbir Fatima as she conducts a workshop over there. What she’s doing is part of Hyderabad Design Week. But there’s much more to it than just passing on the knowledge to the participants. “It’s to humanise design,” says the M. Arch alumnus of London School of Architecture.

And what does it mean to ‘humanise design’? Well, it’s all about raising awareness about design. Her studio DesignAware is involved in crowd-sourcing design through multiple activities. “We encourage people to get involved in creating installations in public spaces,” she shares. 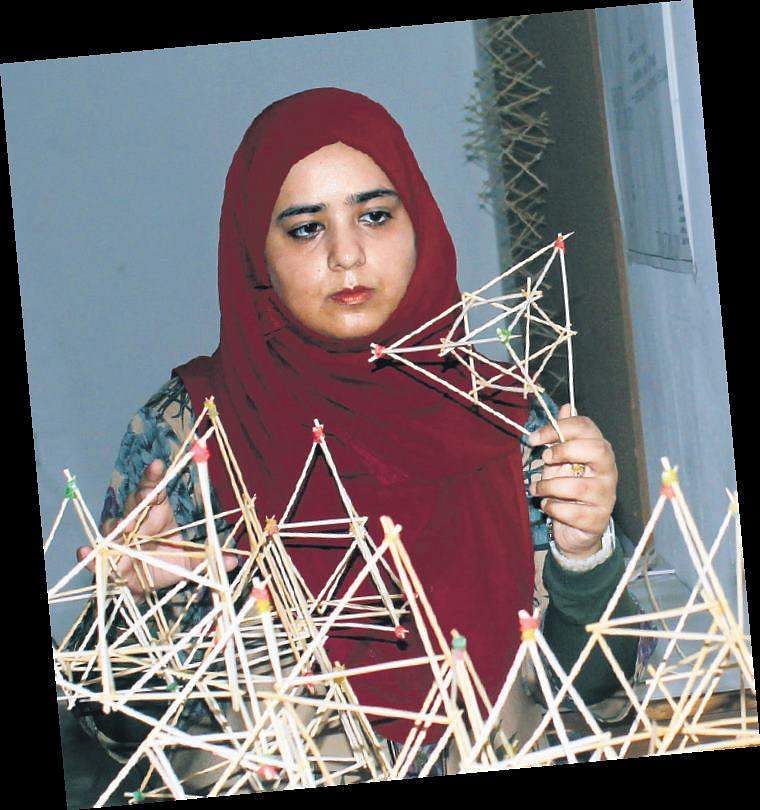 These activities will be part of the FLOCK pertaining to community-based workshops to help participants create installations with pre-cut pieces. Anyone of any age and any background can be a part of this! These architectural prototype pieces are geometric puzzles which attract people so that they can build whatever they want from the loops and grooves. They just have to grab a piece and begin. Most of what the people design will be exhibited at world Design Assembly at HICC. These will be displayed as public art installations.

So does her architectural pieces culminate into objects of art? She bursts out laughing, “Artists will be offended if I call myself an artist and my works opuses of art! What they produce is for the sake of art, on the other hand, what we design is for a specific purpose-built on scales much larger.” Despite that, she calls architecture as something where mathematics meets art.

She uses common materials that can be purchased in bulk. That’s how one sees prototypes made from paper cups, cane sticks, wooden skewers and even broomsticks. “This has got to do more about learning the design process than the final outcome. After the participants are taught, what emerges is aggregation. And no they are not items that can be used for decoration,” she adds. Is there any particular methodology applied to this? “It’s all derived from Nature that everything grows according to the laws of Nature,” she shares.

Wearable design is her another interest. It’s a culmination of architecture and accessories. But how? “We create pieces like bangles, rings etc which fit with architectural formula. Say every layer of the wearable is rotated by five degrees at a specific angle. We also have 3D printing and digital fabrication,” she shares.

Many of these interesting projects are held at her studio at Toli Chowki which used to be a dilapidated house till she redesigned it using digital fabrication incorporating her own design elements. That’s where she works with her sister Abeer Fatima and co-worker Asma Moazzam.

How did she become an architect? She was inspired by her distant relative Syed Anwar Aziz, a well-known architect in the city. She grew up in Al Khobar, Saudi Arabia till her family decided to come back to Hyderabad in 2002 where their roots are. “My grandmother was an artist and an art teacher, maybe it’s from her that I picked to do something creative,” she says adding that after completing her B. Arch from CSIIT, Hyderabad she took up work.

“Whenever I would be in the city for vacations, I would just be dazzled by its old architectural structures especially Qutb Shahi Tombs and Golconda Fort,” she says. That’s how she sees the vernacular construction method very powerful.

“We have married it with modern design. And vernacular construction is rooted in Sacred Geometry used hundreds of years ago,” she says adding further, “People need to reclaim the public spaces and need to come forward to be a part of public installations.  Hyderabad Design Week begins from October 9 and will be on till October 13  held at multiple venues