Grid Policy to push IT growth to all corners of Hyderabad

While 90 per cent of growth in the sector has been in Madhapur, Gachibowli and Kondapur, the government will develop 100 acres of land in five years and give concessions of Rs 66.75 crore.

HYDERABAD: The Telangana cabinet approved the proposal to ensure that IT industry comes up in all the four directions of Hyderabad. The Cabinet wanted incentives given to IT companies who set up their units in all directions other than in the West.

For this purpose, a Hyderabad Grid Policy for growth dispersion has been approved. As the growth in IT exports from Telangana was 18 per cent over last year at Rs 1,18,000 crore, it has been decided to give further fillip to the sector.

As 90 per cent of  growth that had been logged in has taken place in Madhapur, Gachibowli and Kondapur and the surrounding areas, it has been decided to develop the IT sector in the East (Uppal, Pocharam), North (Kompally) and South (RGIA, Shamshabad and Adibhatla and North-West (Kollur/Osmansagar) and areas outside of West which would form the Hyderabad Grid.

In the next five years, about 100 acres of land would be developed into IT areas. In Uppal and Pocharam, Ghatkesar and Kompally, 10 million square fit of office space would be created and one lakh new IT and ITES jobs would be created. 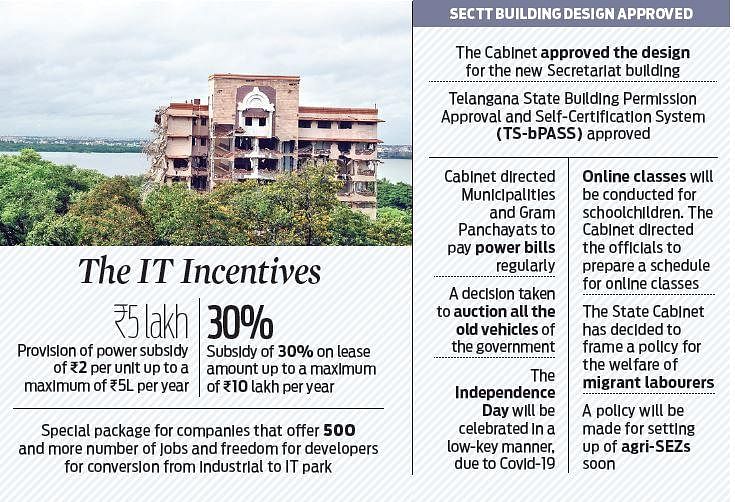 Now we are on Telegram too. Follow us for updates
TAGS
Hyderabad Grid Policy Telangana cabinet Hyderabad IT expansion