The HMDA’s rules to this effect have been changed in order to ease traffic congestion on the city’s roads.

HYDERABAD: Approach roads have to be at least 100-ft-wide, instead of the existing 30 ft, for a layout in the Hyderabad Metropolitan Development Authority (HMDA) area. The HMDA’s rules to this effect have been changed in order to ease traffic congestion on the city’s roads. If the approach road is less than 100 ft, the developers would have to pay a road impact fee — additional charges for road formation/improvement. According to a GO issued by the department of Municipal Administration, there is an aspiration among the residents of the middle, upper-middle class, and salaried employees to own a plot within the ORR where they can settle down post retirement. 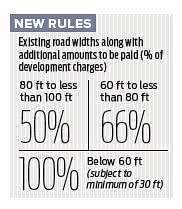 As a result, a number of layouts are coming up. “This implies that traffic flow has increased manifold or will increase exponentially once the layouts are ready and occupied. This will result in traffic congestion during peak hours, and will cause a lot of inconvenience to the public, including occupants of these layouts,” the order read.

The Telangana government, after studying the problem, consulted transportation and traffic experts as well as urban planners. They, in an unanimous policy advisory, recommended a proper road network with sufficient width of roads for free movement of vehicles. The minimum road width recommended by them, and as seen in all well-laid-out townships and planned development, is 100 ft, the orders said.

In case the existing road width is less than 100 feet, applicants would have to either lay the stretch with the prescribed width up to their site (including their site for the portion affected) or leave the land required for widening the road from their site (equal on either side). They would also have to pay the road impact fee. However, these additional charges are applicable to all applications pending approval, which would be issued after this date. These charges are not applicable to final layout applications, where the draft layouts had already been approved earlier.

Now we are on Telegram too. Follow us for updates
TAGS
Hyderabad Metropolitan Development Authority HMDA Hyderabad roads