You can click photos that go viral for a camera rented for Rs 150 if you really put your heart, says Subhash Damera who clicked the viral picture of a teary-eyed girl sporting a newspaper mask.

HYDERABAD:  Subhash Damera never imagined that a photograph he clicked would go viral. That too a photo he clicked with, what he calls, a low-end camera that he rented for an hour for Rs 150! This final year degree student who is passionate about photography has been trying to give his best shot for the last four years.

“I don’t own a camera and would often rent out the equipment whenever I felt the urge to shoot. Initially, people would mock my passion. They think I was overdoing it by hiring the camera equipment. Last year for Ganesh Chaviti, I visited one of the Ganesh pandals to capture photographs of the God, the crowd and the activity. 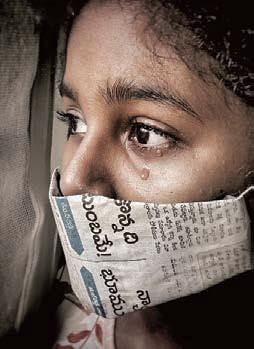 My brother scoffed at the idea of me hiring it for an hour to shoot photos professionally. Like people order biryani when they crave for it, I like to rent it out and satisfy my creative urge whenever I want to shoot,” says the 20-year-old student. “I clicked a photograph of my sister wearing a newspaper mask shedding a tear as a representation for the sad times we are in. This photograph changed my life. A few other photos I clicked in the last few weeks reached over nine lakh social media views/likes,” he says.

His personal favourite, however, is a series on the farmers of Raghunathapalli which he clicked on the highway between Hyderabad and Warangal, his hometown. Subhash is shocked that despite photographers being top -notch professionals earning lakhs every month, his parents would often chide him saying, “Do you want to go to weddings and capture pics or what ? Instead of that, why don’t you get yourself a good job.” However, luckily the tide changed when Subhash managed to even get professional photo assignments such as baby showers and baby shoots during the lockdown.

He used the same rented camera for these shoots. “Interestingly, now my parents are sending my clicks to friends and family and are proud of my work,” says this budding photographer. Subhash has also captured some good shots of his hometown Warangal during the lockdown and all of his 200 professionally shot photos seem to have the thumbs-up of social  media  users. His photos of a farmer capturing the sights and scapes of Telangana also has got a lot of applause. “It’s not a camera, but a heart that can see the real picture that you need to capture the moment,” he adds.

Now we are on Telegram too. Follow us for updates
TAGS
Photographer Subhash Damera