'The Masala Box': Spice, ice and all writings nice

These ladies joined hands together to compile an anthology of short stories, which encompass different geographical locations, moods and narratives.

HYDERABAD:  What happens when four women get together with several stories bubbling within them for a long time? Gossip at a party or a dinner place, right? Quite the opposite to the general and the rather stereotypical notion that women can only ‘talk’. These ladies joined hands together to compile an anthology of short stories, which encompass different geographical locations, moods and narratives. 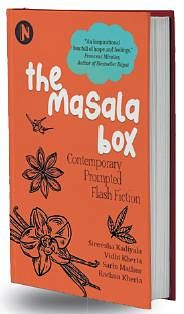 These authors are Sarin Mathur, Sireesha Kadiyala, Vidhi Kheria, and Rachna Kheria and it’s their debut book. Sarin and Sireesha have root connections with Hyderabad and the same reflects in the tales they tell. The book is titled ‘The Masala Box’. And no it doesn’t have masaledaar gossip. It has stories of life, reality and more.

Even though the book is self-published by NotionPress, it was compiled during the lockdown period. But how did that happen? Says Sarin, “We were a team of four writers, but couldn’t begin writing because of our very busy schedules. However, a collection was already there in our minds. We all work for an organisation called ‘Millenium Mams’; we started the work during the lockdown as it suddenly gave us a lot of time and space.” She was born and brought up in Hyderabad and that’s how the book has snippets from the city.

She says, “I have memories of hoardings on the roads, the bus rides. Our family used to travel from Hyderabad to Vijayawada and Rajahmundry and I have fond memories of the same.” They all write in different genres but support and advise one another. “We have each other’s back and suggest prompts. We keep in touch through Zoom, WhatsApp, and other apps,” adds Sarin.

Another co-writer Sireesha Kadiyala, who has roots in Telangana and AP says, “I have memories of Papaji da Dhaba, Tank Bund and Necklace Road etched in my mind and these appear as different elements in the book.” At the same time, the pandemic and the lockdown must have taken its own toll so how did they cope up with the writer’s block? Says Sireesha, “Writer’s block is a reality. We had to pull each other out of the maze whenever it hit us. At the same time, the question ‘how can four women write together?’ was put to us which was both humorous and challenging. But we decided that come what may we will not give up.”