The city police on Thursday cracked a daylight robbery that occurred at the residence of an Ayurvedic doctor at Moghalrajapuram and took five persons into custody.

VIJAYAWADA: The city police on Thursday cracked a daylight robbery that occurred at the residence of an Ayurvedic doctor at Moghalrajapuram and took five persons into custody. The police recovered Rs  34.75 lakh in cash and 48 grams of gold worth Rs  2.5 lakh from the accused. 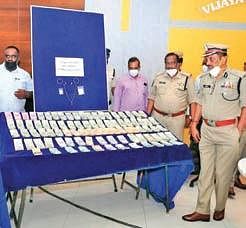 The accused were identified as U Nagendra Babu (28) alias Nagendra and Y Sai Kiran (27) alias Sai of Madhura Nagar, B John Wesley (25) alias Johan of Tadepalli in Guntur district, J Akhil (22) of Pulakampadu in Guntur district and M Vijay (26) of Vanukuru village in Penamaluru mandal.

Commissioner of Police B Sreenivasulu said that one M Vijay, who worked as the PRO at the hospital run by Ch Muralidhar, called up the doctor’s wife, Swarupa Rani and cautioned her that some people were roaming suspiciously near their residence. When the doctor’s son came out to lock the doors, four persons wearing masks and gloves  barged into their home brandishing knives, tied up Swarupa Rani and son Teja Sai with ropes and stole gold worth Rs  50 lakh and Rs  48.5 lakh in cash from the lockers.

“During our investigation, we came to know that M Vijay along with U Nagendra Babu run a canteen on the hospital premises. The duo had planned the robbery and hired three more persons to execute their plan,” Sreenivasulu said.

He said that earlier cases were filed against John Wesley and Prakash at Mangalagiri police station for chain snatching.

Now we are on Telegram too. Follow us for updates
TAGS
Hyderabad Hyderabad robbery