‘Everything I am today, I owe to newcomers

HYDERABAD :  Actor Nagarjuna Akkineni is thrilled to return to the action genre with his upcoming film, Wild Dog, a story inspired by the aftermath of the serial bomb blasts that shook Hyderabad in 2007. Calling Wild Dog a ‘new-age commercial entertainer’, Nagarjuna says, “It’s a film based on real events, and director Ahishor Solomon has ensured that it is loaded with all commercial elements. I was in Hyderabad when the blasts happened, so I could really relate to this story.

The film has some chilling action sequences and I enjoyed working on them.” He shares that the story begins with a bomb explosion at a German bakery in Pune. “An investigation kicks off, and by the time the identity of the mastermind gets traced, he has fled and appears in Nepal as a quack. I am confident that what then follows will make for a really exciting watch.” The actor plays ACP Vijay Varma, who leads a team of NIA officers entrusted with tracking the bomb blast perpetrators. “My character is a patriot who wants to wipe out all forces that destabilise his country. 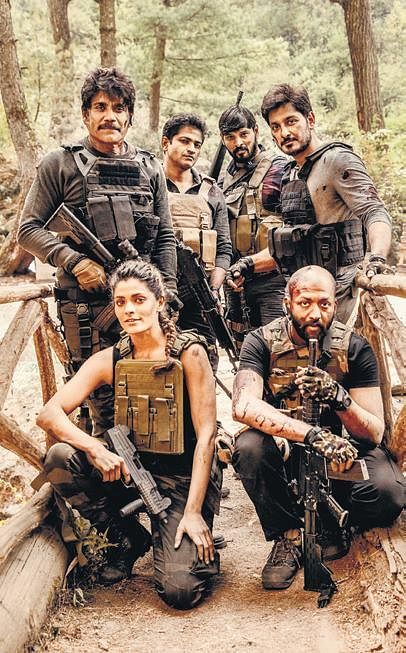 Every man will aspire to be as powerful, and every woman will want such a man. It is one of the best characters I have ever played.” The attraction for Nagarjuna was all the extensive research that director Solomon supposedly carried out before he pitched the story, including meeting Major Ajay, who was a part of the surgical strike operations. “The Major accompanied us on the sets and helped us make the film more authentic. Our action choreographer David Ismalone specialised me in combat training, sign language and even small asks like holding a gun.” Nagarjuna remembers that the script was narrated in August 2019. “We wanted to finish shooting in six months.

We completed half of the shooting by the lockdown, having travelled to places like Old City, Mumbai, and Pune.” The plan then was to go to Thailand and Sikkim to shoot the remaining portions, but the lockdown put paid to it. “We filmed those portions in Manali’s Rohtang Pass and Nepal. Also, as our action choreographer David Ismalone got stuck in Bangkok, we found a replacement in Sham Kaushal.” Wild Dog marks the directorial debut of Ahishor Solomon, and interestingly, he is the 40th debutant to work with Nagarjuna. “I feel anxious working with newcomers. At the same time, I like working with them, as I get the freedom and flexibility to push myself into new territory.

I also get a chance to play challenging characters like the one I have played in Wild Dog.” He is also convinced that new filmmakers show him in novel ways. “I get bored of playing the same character over and over again. By trying these combinations, I have delivered both hits and flops, but I will always proudly say that everything I am today, I owe to newcomers.” The 61-year-old actor enjoys working on complex action sequences. “I am a fitness freak and work out regularly. I feel like I am just 31,” he says, laughing. “This character demanded that I walk on uneven terrain in Himachal Pradesh, and I knew this was a journey that would take a toll on the body. I have no complaints though, as there are always challenges when doing a movie of our choice,” he says.

Meanwhile, with the Hindi film, Brahmastra, Nagarjuna will be returning to Hindi cinema after 15 years. In this film directed by Ayan Mukerji and featuring Ranbir Kapoor, Amitabh Bachchan and Alia Bhatt, the actor is reportedly playing an archaeologist. “It has been conceived as a trilogy and we have wrapped up the first part already. I am playing a different character that is powerful and unique in its own right. I will be seen for about 30 minutes in this film; it’s one of the most exciting roles of my career.” The actor is also gearing up for the 100 film landmark, and is admittedly leaving no stone unturned in his plans to make sure it’s a successful film.

“I have not yet decided on who I will be doing this film with, or what genre I want to do it in. There’s still time to make those decisions.” There are rumours suggesting that this landmark film could see him working alongside his youngest son, Akhil. “I am currently working for Praveen Sattaru’s film and Akhil has to begin his next with Surender Reddy. I am also committed to doing Bangarraju (a sequel to Soggade Chinni Nayana).” He does admit to the temptation of working with Akhil. “I am longing to do an action film with Akhil. Let’s see how things pan out.” The Praveen Sattaru film will have him sport a salt-and-pepper look, but Nagarjuna is careful not to give away too much about the project. “All I can say now is that it’s a slick action thriller and we are planning to wrap up work by July,” he signs off.