Police first checked the CCTV cameras at the junction and found a person taking away the child.

HYDERABAD: Rachakonda police who had rescued a two-year-old child G Abhilash, from a kidnapper Manupati Muthaiah, found that he took good care of the child and fed him from time to time when the child was in his custody for 30 hours. Since the child didn’t have any footwear, he purchased a pair of shoes for the child at Choutuppal, which was also captured on CCTV. Police scanned more than 70 CCTV cameras, covering a 70 km stretch from Kothapet junction at Saroornagar police limits from where the child was kidnapped, till Anthampet village of Marriguda mandal in Nalgonda district, to rescue the toddler. 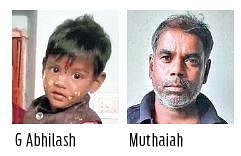 After the child was kidnapped from Kothapet junction on Tuesday afternoon, the parents lodged a complaint. Police first checked the CCTV cameras at the junction and found a person taking away the child. Later, he was captured with the child in the Vijayawada bus stop at LB Nagar junction. He was seen boarding an auto, but the vehicle number was not visible. The auto driver, when questioned, identified the kidnapper. Police later found the kidnapper’s movement at Choutuppal. There he purchased a pair of shoes for the child and also some snacks to feed him.

Cameras showed them boarding another auto going towards Narayanpur in Yadadri Bhongir district. From there, he boarded another auto towards his village. These two auto drivers were also questioned. Villagers led police to Muthaiah’s house, where he was found playing with the child.

What surprised the police is that even after they reached Muthaiah’s house, the child continued to play with him happily and did not show any signs of missing his parents. Police said he took good care of the child, since he was desperate for a child for a very long time

Now we are on Telegram too. Follow us for updates
TAGS
Rachakonda police Hyderabad Hyderabad kidnapping