The incident happened when the lorry driver attempted to avoid hitting a car coming from the opposite direction, as a result of which he lost control on the wheel, the police said.

HYDERABAD: Five migrant labourers, hailing from Odisha, were killed and several others sustained injuries when the lorry they were travelling in overturned at Shamshabad, on the city outskirts, on Sunday evening. The incident happened when the lorry driver attempted to avoid hitting a car coming from the opposite direction, as a result of which he lost control on the wheel, the police said.

The victims worked at brick kilns and came to Shamshabad to purchase vegetables at the weekly market, said ACP Shamshabad V Bhaskar.According to police, the victims lived in Kacharam village near Moinabad. Since Sunday was a holiday for them, as many as 25 migrant workers came to the weekly market at Shamshabad for buying vegetables. After purchase, they were returning to Kacharam. 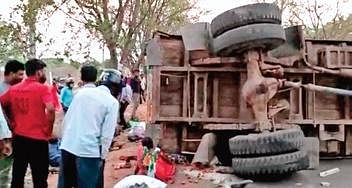 They boarded a lorry to return to their place. Midway, at Narkhuda village under Shamshabad police limits, the lorry driver lost control of the vehicle when he tried to avoid hitting a car, which was coming from the opposite direction.

The lorry brushed the front portion of the car, swerved to the left and fell off the road. As a result, the victims got trapped under the vehicle and sustained severe injuries. Three people died on the spot and two others while undergoing treatment. The condition of at least two others is critical, said police. A case has been registered against the lorry driver. Police officials said that the investigation is under progress.