KOCHI: The report submitted by the Kerala Water Authority (KWA) recently, certifying that water from the Periyar is potable, is nothing short of hogwash, claimed environmental activists.
The report was tabled in response to a directive issued by District Collector K Mohammed Y Safirullah to prove that water from Periyar, which is the primary source of drinking water in the district, is safe to drink. The Collector had intervened after environmentalists and the general public alleged that the water was contaminated. 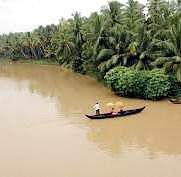 As per the report, the KWA tested the colour, taste, odour and pH factor of the water, among other parameters, but left out the more important aspects like presence of toxic metals and pesticides. Thus, the report is incompetent to certify quality of the water, which is consumed by millions daily. Meanwhile, KWA-Quality Division executive engineer Bindu Sugunan said her team did not conduct any new test on the water based on the request made by the Collector. “The report features findings of the ‘latest routine tests’ conducted by the KWA at SRI Laboratory at Maradu. We tested water samples on various parameters under the categories of ‘physical, chemical and bacterialogical.’ However, it was found that the impurities in the water were within the permitted limits,” she said. On being asked about the other parameters like toxic particles and metals, Bindu said the KWA study was limited to the routine tests.

As per the standards set by the World Health Organisation (WHO) for testing the quality of drinking water, presence of toxic metals and pesticides must be checked.There have been repeated allegations from the general public, environmentalists and activists that industrial units functioning on the banks of the Periyar were discharging toxic waste into the river. According to them,  a government body like the KWA was duty-bound to check the level of toxicity in the water before pronouncing it to be potable.

“The tests carried out by the KWA are simple tests. The SRI lab, where the tests were carried out, is not an NABL-accredited facility. Meanwhile, studies by independent agencies have confirmed the presence of toxic metals like cadmium, lead and arsenic beyond the permissible levels in the Periyar. The KWA report is a sham,” said a activist G D Martin.