‘We should agree to disagree’

KOCHI: In his terrace art gallery, at his home behind the sprawling campus of the Cochin University of Science and Technology, at Kochi, K A Soman (Artist Somji) is busy getting his works ready. Some have already been framed, others yet to be. His exhibition, titled ‘Identity of Tolerance’, which is being held at the Durbar Art Gallery, from December 12-17, will consist of as much as 70 paintings. But they have all been done in the abstract style.

One striking image is of an old man, with his right hand covering his nose and mouth. Standing next to him is a woman in a black shroud. Behind her, there are raised hands almost pleading for help. On the right, there is another hand which looks like it is raised in protest.“The ordinary man is horrified by what is happening in the country now,” says Somji. “He probably knew about a tolerant India earlier. Now he is feeling ashamed of what is happening.” 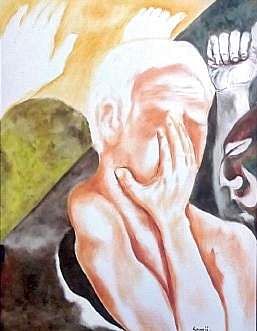 The retired Deputy Commissioner (Taxes) continues, “Tolerance is a very relevant theme these days not only in India but all over the world. A lot of atrocities are being done in the name of tolerance. For example, the insistence of singing the national anthem, the over-protection of the cow, hyper-nationalism, the suppression of free expression,  and the insistence of eating only particular types of food. People are also prescribing the way you can dress. So, they are frowning on T-shirts and jeans.”

In another work, there are several cows crowding the frame in front. Behind it are two faces with grim expressions. “The cow has become the dominant motif in our national discourse,” says Somji. “In north India, the cow is being deified. It is an animal which gives us a lot of milk, and other benefits. But to raise it to a divine level, will cause problems. India has a huge and diverse population, so the only way to move forward is to consider the views of all the people.”

But the airing of views has become a fraught affair. “When we express a point of view, there are people who will oppose you vehemently,” says Somji. “Many times, they use violence. This has been exemplified by the murder of journalist Gauri Lankesh. I believe that one should agree to disagree so that all views can be aired. We have to formulate new ideas through discussions and mutual understanding. But that is not happening at the moment.”

In another work, a couple is looking at each other. But staring at them is a man who does not look pleased at all. There is also an image of a man who is wearing a full-sleeved shirt, but who has the face of a rhinoceros with the horns sticking out from the face. A person standing next to him has the same horns. At the side, there are two women who are kneeling and praying.

“The rulers are pretending to be human beings, but they are rhinos, ready to use their tusks, and shed blood, to achieve their aims,” says Somji. “They are building a society where people have to be like rhinos in order to survive. As for the women, they are kneeling and praying to their forefathers. I also wanted to show that in a male-dominated society they will always remain in the background.”

Besides most of the paintings, Somji is planning to put up telling quotations by great people. One is by the spiritual leader, the Dalai Lama, who said, “In the practice of tolerance, one’s enemy is the best teacher.” Noted educationist Helen Keller had said, “The highest result of education is tolerance.” As for the Father of the Nation, this is what Mahatma Gandhi said: “Intolerance is itself a form of violence and an obstacle to the growth of a true democratic spirit.”This thought-provoking exhibition makes us aware of the direction the country is moving.