Party is still on

Though the police have strengthened their vigil against such drug-fuelled rave parties, many such events are being organised secretly in the city

KOCHI: With less than two weeks left for New Year, the city police are on their toes to nab online drug racketeers who organise rave parties. Even though the police have strengthened their vigil against such drug-fueled parties, many such events are being organised secretly in the city.On Saturday, the city shadow sleuths arrested a seven-member gang from a secret rave party which had been organised at a private resort at Cheranalloor. The sleuths found around 300 persons including women in a drug-induced stupor at the party. 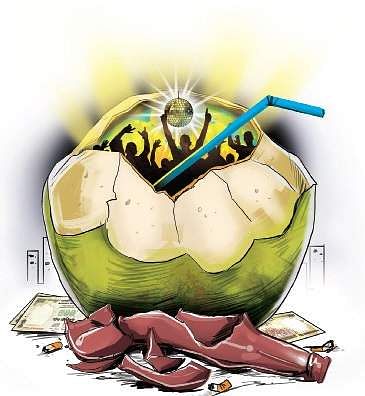 The raid was conducted as a part of ‘Operation Duster’. The drive was launched by the City Police Commissioner M P Dinesh in order to stop the influx of drugs into the city. The sleuths are closely monitoring the operations of the drug mafias and have also joined many WhatsApp groups to keep tabs on them.Till date, the police have arrested around 20 persons who are connected with the online drug mafia and also ganja peddlers. “With the law enforcement departments pulling the plug on rave parties in Goa and Bengaluru, the drug mafia has turned its attention to Kochi. But the police are ready for them and have initiated steps to arrest those linked to the online drug mafia. These drug racketeers are organising rave parties in remote areas and at private apartments,” said a police officer.

As to the question how these drug peddlers are conducting their business, a city police officer said, they contact their customers on the Facebook and via WhatsApp. “Social media platforms have turned into trading arenas for those involved in selling narcotics,” he added. The drug mafia has taken to these online platforms to supply banned substances for the New Year rave parties which are being planned secretly in the city.

Their operations are similar to money chain marketing. A customer gets added to the group only when introduced by an existing member. Once the customer is added to the group, he or she is sent the link to an online site on which the person can place an order citing the type and quantity of narcotic or psychotropic drugs required.

According to police officers, the drug mafia charges as much as Rs 10,000 as entry fee from new customers. The package might vary depending on the customer’s needs. Rave parties are organised using the same modus operandi. “The entry fee for the party called ‘Sonic Boom’ which was organised at Cheranalloor was less. This was to attract more customers. The organisers aimed to sell various high-end drugs at the party. They had even launched a three-week long campaign on the Facebook and WhatsApp,” said an officer who took part in the raid.

The sleuths were able to infiltrate the group by posing as customers. “Our squad members managed to get into the WhatsApp groups of those organising rave parties like ‘Casino Nights’, ‘Heaven For Earth’ and ‘A Walk in the Cloud’. Based on the information received,  we arrested three and seized a lot of drugs, including buprenorphine ampoules and nitrazepam tablets,” said the officer.  Devan alias Kurudi, 24, was arrested on Wednesday from Elamakkara after the cops gleaned information from a WhatsApp group. Two others Manikandan 42, a native of Kanyakumari and Suresh, 38 of Nagercoil were nabbed on Tuesday.

“During these operations, we seized drugs mainly buprenorphine ampoules and nitrazepam tablets. The inflow of these kinds of drugs increases prior to New Year. They are a staple of the rave parties,” said the officer.  According to the officer, ganja peddlers were also nabbed. “Operation Duster, the one-month long special drive, which began on December 12 will end on January 12,” said the officer.

A big haul
During the raids conducted as a part of Operation Duster, shadow sleuths arrested 10 persons and seized a big haul of narcotics. Of the ten, seven were arrested from a rave party. Aljin Antony, 21 and Derick Francis, 23, both from Eloor, Pranav, 21 and Midhun Shaji, 20, both from Tripunithura, Mirza, 25 and Asif, 31, from Attingal and Dion, 22, from Aluva.