It was indeed the ‘Year of the Bigot’ as regards the state’s key infrastructure projects.

KOCHI: It was indeed the ‘Year of the Bigot’ as regards the state’s key infrastructure projects.
Strikes and disruptions have stalled work on the Gas Authority of India Ltd (Gail) pipeline project (`3,263 crore), the LPG terminal-cum Kochi-Salem pipeline (`2,200 crore) and the Vizhinjam port (`7,525 crore). Meanwhile, the tussle with the contractor and the restructuring of the parent Dubai Holding gave nervous moments to the SmartCity-Kochi project.

Yes, there are silver linings too – the much-anticipated Kochi Metro Rail was launched, making travel in the state’s commercial capital from Aluva to the city centre a lot easier; the Kannur International Airport is all set for inauguration next month (January 2018) and the Cochin International Airport’s new international terminal (T3) was commissioned. 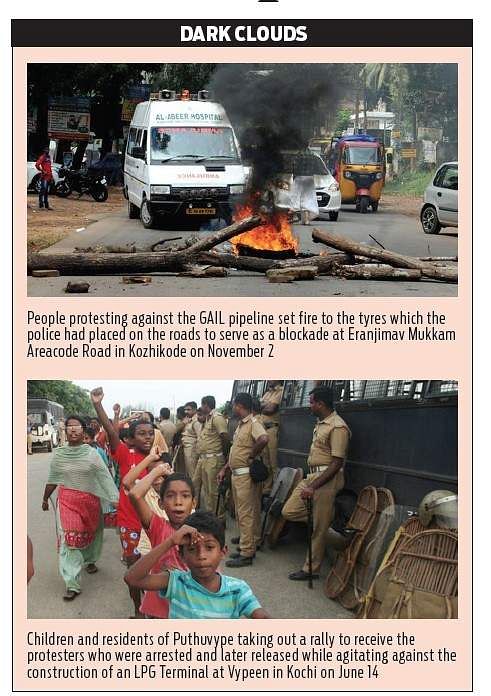 The Kerala economy is at a crucial juncture. Remittances from non-resident Malayalees (a large segment coming from the oil economies of West Asian countries), which constituted nearly 36 per cent of the state’s economy, is slowing down. We can’t rely on these remittances in the coming years as the demand for oil is coming down significantly, triggering job loss in the Gulf region, and people are returning home.

Rudra Sensarma, professor-economics, Indian Institute of Management, Kozhikode, believes, and rightly so, that the environment activism in Kerala has brought in positives to the state’s landscape and ensured that ‘development’ cannot be thrust upon the people forcefully as is seen in some northern states. But he also sees the irony that people of all classes – ordinary, political and educated – view almost all projects with suspicion.

“Private enterprise and profit are dirty words (in Kerala),” Sensarma says.
So what happens? The mindset ensures that even projects by public sector undertakings like Gail and IOC are disrupted, even after the companies receiving all the clearances. While projects such as the IOC LPG Terminal are crucial, the way forward is to build on the natural advantages for the state, considering that land is at a premium.

“Big bang industrial projects are difficult for a state like Kerala,” reckons Sensarma.
As we look forward to the new year and beyond, the lawmakers would do well to frame policies that would suit the state, such as harnessing capabilities in IT, financial technologies and R&D, besides capitalising on the natural advantages in tourism, education and health. “There is no dearth of talent in IT, and the infrastructure can be built vertically,” says Sensarma.

It’s now or never for ‘God’s Own Country’. We missed the bus during the IT boom of the early 1990s despite building the first IT zone ‘Technopark’. As the world embraces the new buzzword in IT, such as IoT, 3D, robotics, etc, it’s time to acknowledge ‘big bang industries’ is not our future. Rather, riding the current trend in IT and capitalising advantages in  hospitality, education and healthcare can reap rich dividends.