From chalk letterings in cafes, titles of novels and  college magazines,Prajwal Xavier has made a name for himself as a calligraphy artist

KOCHI: For emerging calligraphy artist Prajwal Xavier, Malayalam is not merely a language but a medium to carry out his passion- the art of lettering. The 26-year-old who hails from Panangad in Kochi is a popular artist in Instagram. We catch up with the artist to speak at a cafe, to find out what drew him to the art and the success he tasted so far. “My curiosity towards letters began at a young age. I was very inspired by the handwritten typefaces on hoardings, public transports and ads on walls.

I used to replicate them all over my notebook,”said the young artist. Prajwal has an affection towards Malayalam letters, though he works on English too. According to him, English has typefaces in abundance in graphical medium which makes it less challenging for artists like him. Malayalam lacks typefaces which makes the work all the more enticing. 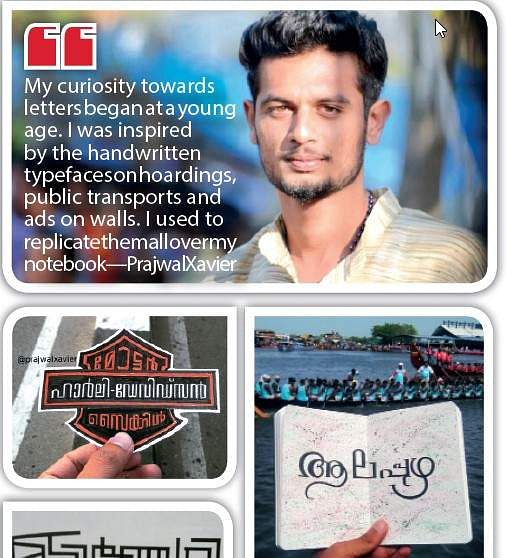 “Noted calligraphy artist Narayana Bhattathiri is my idol. An article by him about the art of letters, was a  turning point in my life towards this art,” he said. For Prajwal, the artist in him found platform initially in his notebooks and cover pages of assignments. Later, Instagram provided him with an opportunity to feature his works and grow into a better craftsman of letters. In Instagram, his works are divided into three different categories- pure Malayalam  calligraphy, ‘travel and lettering’ and nano-stories. The most popular one being ‘travel and lettering’, it features places he visited in a photograph along with the name of that place hand-lettered by him.

According to 23-year-old Erham Muhammed from Kalamasserry, Prajwal’s ‘travel and lettering’ is something he personally looks up to. His letters capture the very character of the place he features and  the words which we leave unnoticed turn into art,” said Erham. Nano-stories are tiny hand written tales with much greater impact, much loved by his followers.

Prajwal is a popular artist among Malayali Instagrammers and Facebook users. “Prajwal’s works are astonishingly simple yet complicated. The way he breathes life into the words is what I love the most about them. It brings in  a sense of nostalgia for me”, says Vinayak Raj (26), a graphic designer from Chennai. His art expands to hand lettered wedding cards, chalk letterings in Cafes, titles of novels and college magazines. “ I dream of putting up an exhibition showcasing  hand written Malayalam typefaces in the near future. As a calligraphy artist, I look forward to create more lettering styles in Malayalam for graphic typefaces though I personally prefer hand lettering,” he said.