The Jew Town at Mattanchery is one of the major tourist spots in the city, with the Paradesi Synagogue being the main attraction.

KOCHI: The changes are evident. Earlier, the shops on the street leading to the 450-year-old Paradesi Synagogue were mostly owned by the Jews. However, today the Star of David vies for attention with the articles on display at the Kashmiri stalls. Living a secluded but peaceful life in these changing times are five members of the community, all in their advanced years, except for a 40-year-old woman.

A peek into history

Different versions exist about the arrival of the Jews in Kerala. Historians say the Paradesi Synagogue was built in 1568 on the land granted to the community by Keshava Rama Varma, Raja of Cochin. The township came up around it. They led a peaceful existence, learning the language and culture of the locals, while taking care to preserve their own.

“It was once a thriving community, with more than 250 members during its peak in the 1950s. Thereafter, most migrated to Israel,” said Thaha Ibrahim, a shopkeeper, who takes care of Sarah Cohen, the oldest Jew. 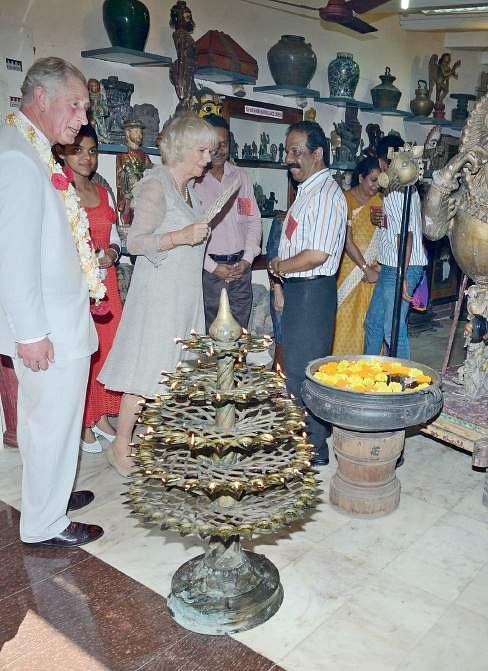 The Paradesi Jews evolved into a Malayalam-speaking community, right down to the Fort Kochi slang. However, they are zealous in preserving their traditions. They still abide by the old Hebrew script, while their counterparts in the rest of the world use a modern script.

Other than the Paradesi Jews, there are around 20 others living in and around the city. They come together at the Paradesi Synagogue during festivals. But services are conducted only when Jews from abroad come here since ten men above the age of 13 are needed to make a quorum for their prayer.

The remaining five Sarah Cohen: Creating magic with a needle

The only authentic Judaica shop left in the town is Sarah’s Embroidery Shop, owned by 94-year-old Sarah Cohen, the oldest Jew in the town. Her caretaker Thaha Ibrahim runs the shop.

Wearing a kippa, the traditional brimless cap worn by Jewish men, Sarah sits near the window of her house chanting prayer songs from a very weathered book. The cap belonged to her husband who passed away 17 years ago.

“We used to sing these songs at the synagogue,” says Sarah, who loves to regale the occasional tourist with stories from yesteryears in fluent English. But, time has erased much of her memories.

82-year-old Queenie Hallegua sat the whole day reading, since it was the Shavuot, a festival that commemorates God’s giving of the Ten Commandments to Moses. “The Jews are not supposed to work on such days. Instead, they can read the Torah,” she said.

Queenie belongs to the Koder family. She used to live at the Koder House at Fort Kochi and her family was very wealthy. The house is now a hotel.  Queenie married Samuel Hallegua and has two children, both of whom are settled in America.

Her daughter Fiyona completed her studies from St Teresa’s College and moved to America, where her brother had already settled. “Fiyona calls me every day on her way to work. She loves to talk to me in Malayalam,” says Queenie.

Samuel and Queenie used to go to Israel and America every year. But, after her husband’s death, Queenie rarely travels abroad. The last trip she took was to America nearly two years ago. “This is my ancestors’ land. I belong here. I want to be buried near my husband,” she said. Eager to share her knowledge about the Jewish culture and traditions, Queenie says, “We eat only kosher meat and fish with scales. Since there is no one to kosher the meat for us we import it from Mumbai thrice a year.”

Though their food habits are different from that of the locals, she says, “I am now used to ‘thoran’ and sambar. We prepare Jewish dishes like pastel and kubba only during festivals.”

Queenie loves to spend her time reading newspapers and plying Sudoku. But on Sabbath, which falls on Saturday, she relaxes and spends her time praying.

Keith Hallegua, Queenie’s nephew, who is in his early fifties, is the only male Paradesi Jew left. He lives in the 200-year-old ancestral house near the Paradesi Synagogue.

After completing his studies at Fort Kochi, he went on to become a travel agent.  Keith used to travel a lot and says the western culture has become widespread. “I saw Americanisation everywhere I went,” he said. He has travelled to Israel many times, but opts to stay back in India since he thinks this is where he belongs.

Keith, who is a bachelor, lost his father when he was very young. Talking about the good old days, when their numbers hadn’t diminished drastically, Keith recollects, “There were 20 Jewish families in the neighbourhood. Our neighbours sold their houses to Kashmiris and migrated to Israel. The place since then has turned into a tourist spot.”

Even offering prayers has become difficult, says Keith. “We never get enough men to make a quorum. Hence, the synagogue has become a museum of sorts. A trust has been formed to protect the synagogue,” says he. A philatelist, with almost 20,000 stamps in his collection, Keith is currently planning to work with an insurance company in the city.

Yaheh Hallegua: Planning to migrate
The pretty Jewish lady at the ticket counter at the Paradesi Synagogue is Yaheh Hallegua. She completed her studies from Maharaja’s College but stayed back to look after her 84- year-old mother Juliet Hallegua.

Yaheh, in her forties, is planning to migrate to Israel with her mother. Her siblings Nima and Brian live there. Once Yaheh leaves, the ancient lineage of Paradesi Jews will almost vanish from Mattancherry.