Taking yoga to the Kiwi land

KOCHI: Some three years back Tony Aidney, a 63-year-old native from Auckland, New Zealand, went on a spiritual retreat to Peru, South America, along with his son. The retreat offered three free yoga classes as part of the package. “My son and I were the only two who opted for the yoga classes from among the group of 15 people who attended the spiritual retreat,” says Aidney. “It was an enjoyable experience,” he says. The three free classes in Peru was the beginning of Aidney’s passion for yoga, which is growing by the day. 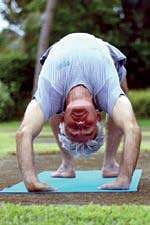 “It started as an experiment for a year when I drifted very often,” he says. Aidney, who is a construction diver, “sub-sea work for oil companies”, as he explains, got an offer in Qatar from ONGC for a work in the offshore high last year. At Qatar, Aidney enquired where he could learn more about yoga, and make it a daily routine. “A colleague - another diver - from Kerala suggested the name of Kochi-based yoga guru S Rajendran,” he says.

Rajendran is well-known in international yoga circuits and was selected by the production team for BBC’s The Real Marigold series-II to train its cast. But, he had to wait for one more year before he could meet Rajendran. Aidney had to rush home from Qatar due to a “family crisis”, leaving little time to visit Kochi.
But, this year, Aidney was called for another offshore work by ONGC, this time off Mumbai.
“The work was for one-week, but I was asked to stay back for another two weeks,” he says. The two weeks gave enough time for the New Zealander to come down to Kochi and practise yoga under Rajendran.

"Though he’s 63, he’s doing even the toughest of asanas with the energy and passion of a 23-year-old,” says Rajendran. “I’m fascinated by the asanas, and I wanted to go to the next level into spirituality, driven by yoga,” adds Aidney.
Yoga has also brought about a sea change in Aidney’s lifestyle. “I’ve completely stopped eating meat. Alcohol consumption has also come to an end, except for occasional red wine,” he says. He says there’s also a significant improvement in his health.

“Earlier I used to get sick regularly. Now, this doesn’t happen,” he says. “Life is more balanced, my personality is completely changed.”
Aidney says he finds more people tuned into yoga in New Zealand than in India. “I’m close to retirement, and I wanted to start a yoga centre in New Zealand next. It’s my dream,” he signs off.