KOCHI: Four months ago, M Praveen Kumar (35), an Uber driver, committed suicide in Hyderabad after a finance company threatened him with dire consequences for not being prompt in paying the monthly instalments. Praveen, who had been with Uber for eight months, was struck hard by the company’s decision to change the revenue sharing pattern. The Hyderabad incident may happen in the city too. 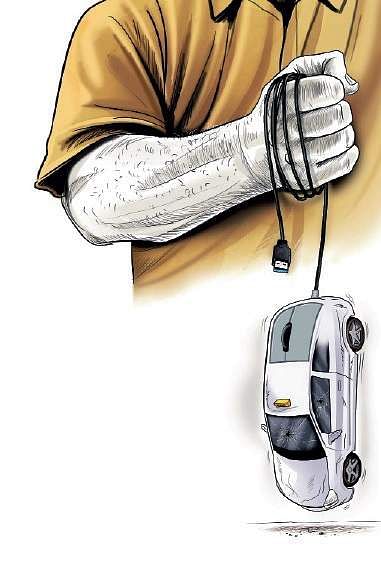 Online cab service companies like Uber and Ola, which began operating in Kochi in November 2014, brought a huge change to the way Kochiites travelled. The incentives offered by the companies prompted many drivers to buy cars, mostly through finance, and join them as partners. But now the honeymoon is over. With Uber and Ola drastically reducing the incentives, nearly all the driver partners are facing an uphill task in meeting their financial obligations. According to the drivers, they are finding it difficult to pay their EMIs.

“I paid the down payment of Rs 1 lakh for my Swift Dzire car by pledging my wife’s ornaments. For the remaining amount, we took a loan from a bank. I used to earn Rs 2,000 per day when I joined the service. But now I get only Rs 500,” said Noushad (name changed) from Malappuram living in a rented room at Palarivattom.

“Every month, I have to scratch together a huge amount to pay the housing, vehicle and the education loans besides meeting other expenses. Because I missed my EMI payments for the past three months, the bank has threatened to seize my car. I don’t know how to meet all these expenses,” he said.

Nithin P M from Iritty in Kannur takes up calls for both OIa and Uber. He too faces a similar situation.

“A year ago, I took a loan to buy a Figo Aspire and headed to Kochi to join the online cab service. Initially, I used to earn Rs 50,000 a month. But now, my earning has dropped to Rs 10,000. It has become difficult to finance my wife’s education besides meeting my family’s needs,” he said.
According to unofficial data, as many as 15,000 drivers are working for Uber and around 10,000 are with Ola. Nithin said, “The situation has gone from bad to worse due to an increase in the number of cabs operating in the city.” Also, the companies’ decision to operate their own cabs will deal a big blow to the already diminishing prospects of the drivers.

“The company collects 26 per cent commission from the drivers. For example, if we get a trip worth Rs 100, we have to pay Rs 26 as commission. We have to meet the fuel and food expense from the remaining amount,” said  Navas Ponnani, secretary, All Kerala Online Taxi Drivers Union. “Many of the drivers sleep in their cars, since they can’t afford the rents. How can a person with so much liabilities live on a meagre amount of Rs 450 to Rs 500 a day?” he said.

In order to get their voices heard, the drivers have taken the IT route. “On Sunday, the association launched an IT war against Uber and Ola,” said Navas. “Techies comprise a major  portion of the companies’ customer base. We will fight them via Twitter and Facebook until our demands are met. Our strike has completed six days,” he said.

However, the companies have a different take on the issue. They said the incentives were part of a dynamic business model. “Driving with Uber is an entrepreneurial activity and is very different from working as a private taxi driver. Our driver partners have the flexibility to choose when and how much they want to drive on a given day. As a result, individual driver earnings vary widely. The future of our business depends on making driving with Uber an attractive choice. And as our business has grown over three years in India, we are seeing sustainable opportunities for driver partners and sustained interest in driving with Uber,” said a statement issued by Uber. Ola officials were unavailable for comments.

The customers too have started complaining about the exorbitant fares charged by Uber and Ola. “Earlier, I could travel from Kaloor to Elamakkara for Rs 70. But now the fare is between Rs 100 to Rs 120. During peak hours, it goes above Rs 150. They are exploiting the customers by charging surge price,” said Shajeena, a government employee.

15,000 plus drivers registered with Uber