Puthuvype residents, left out of development projects, resolute in opposition to LPG terminal

Although the residents were promised jobs, no one has been employed in any of the three multi-billion projects in the area.

KOCHI: Puthuvype, the western suburb of Kochi on Vypin island, lies just 5 km from the heart of the city. Mostly inhabited by fisherfolk struggling to make ends meet, the place is connected to the mainland by the Goshree Bridges. Of late, it is billed as an ‘upcoming industrial area’ in economic parlance.

Petronet LNG’s regasification terminal was set up in Puthuvype in 2013 at a cost of Rs 4,200 crore. BPCL-Kochi has an offshore loading buoy as a mooring point and interconnect for tankers. Now, the Indian Oil Corporation Ltd (IOCL) is planning to build its LPG Import Terminal at Puthuvype, promising to meet the state’s LPG demand. However, local residents are an unhappy lot. They are determined the oil major needs to allay their fears about safety if the project has to come up. The reason is not hard to see. 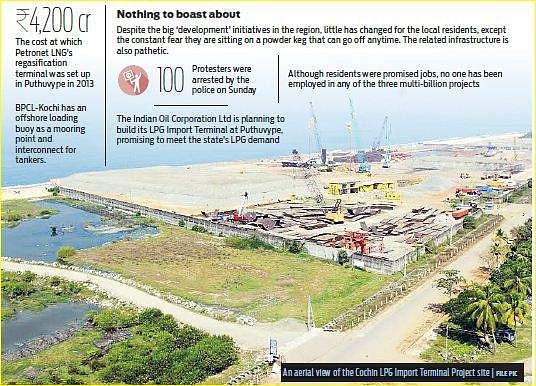 Despite the big ‘development’ initiatives in the region, little has changed for the local residents, except the constant fear they are sitting on a powder keg that can go off anytime. The related infrastructure is also pathetic. For instance, the roads are as bad as they used to be.

The development strides have not brought a change to the lives of people. Although they were promised jobs, no one has been employed in any of the three multi-billion projects.“We have no amenities and our houses are located near the seawall,” homemaker Sindhu Sabu staging a protest in front of the project site told Express. “There are no decent roads. However, the IOCL has constructed a good road to its plant. We are living under constant fear.”

The police baton-charge and arrest of about 100 protesters, including LPG Terminal Virudha Janakeeya Samara Samithi chairman M P Jaya Ghosh, on Sunday have not dampened their spirits. Hundreds of women and children are still up in arms against the plant.

Samithi convener K S Murali held fort outside the project site on Monday as several of his co-protesters were arrested in the last couple of days following tiffs with the police.

He said, unlike the other two projects, IOCL’s project has not gone through the ‘public hearing’ process mandatory for environmental clearance. “Initially, the site of the plant was proposed between 200-500 m of high tide of sea. Later, this was tweaked to 200 to 300 m.

Residents are not ready for any sort of compromise. “We are the first inhabitants of this land. Our forefathers built houses after filling in the low-lying land with sand and mud. Now, cracks have developed in our houses because of the piling work at the site. We will not accept this,” Sindhu said.

Ghosh said they have not received any intimation from the government to withdraw the protests in view of a scheduled meeting with the Chief Minister on Wednesday. “We are yet to receive any intimation in this direction from the government,” he said. “Hence, the strike will continue until the project is withdrawn from here.” Ghosh also accused the police of violating the basic rights of protesters taken into custody, including the denial of toilet facilities to women.

Sindhu said hundreds of trucks will start to ply on the roads, making life miserable for the residents once the terminal becomes operational. “The minister who called us terrorists should come and see the condition of the roads here.”The IOCL said it has all necessary approvals in place for the project designed to conform to global standards of safety.

“The National Green Tribunal (NGT) had permitted IOCL to continue with the work in August 2016,” it said, adding the Kerala High Court had also permitted it last year to carry out work round-the-clock. “During the NGT hearing of April 13, the agitators had promised not to obstruct the work or instigate others to do so. IOCL has been suffering a loss of Rs 1 crore per day since the obstruction of work from February 16,” it said.

HARTAL TOTAL
The dawn-to-dusk hartal called by the Congress in Puthuvype on Monday was total. Apart from the Congress, the CPI, BJP and other outfits also held marches in solidarity with the agitators. The Njarakkal police registered a case against the BJP activists for unlawful assembly.

CONTROVERSY OVER REMARKS
The remark by Rural SP A V George about protesters having extremist links triggered a controversy. Local residents said they will intensify the stir. Denying allegations of police brutality, George said there was no human rights violation against protesters. “The protesters are agitating using women and children as shields to mislead the police. They are getting some external support. We have noticed the presence of a few extremist elements among them. I do not think common people, including women, will take part in such a huge protest,” he said.

KRLCC flays police action
Kochi: The Kerala Regional Latin Catholic Council (KRLCC) is not going to take the police action against protestors who agitated against the IOC’s LPG terminal lying down. Office-bearers said they are planning to spread the Puthuvype agitation statewide.  The KRLCC secretariat has condemned the police action and said stringent action should be initiated against officers who dragged women and children on the road.

If the government does not solve the issue through discussions and pro-active steps, the agitation will be spread statewide, said KRLCC political affairs committee convener Shaji George. ‘’The huge plant is being built violating the norms of the Coastal Zone Management Authority, while local people are denied permission to build houses,’’ it was observed at the secretariat meeting in which KRLCC president Archbishop Soosa Pakiam presided over.

Now we are on Telegram too. Follow us for updates
TAGS
KochiGoshree Bridges