Of a cow, pastoral setting and poetry

The anthology of poems titled ‘Ten Sentences About the Cow’, written and translated by N G Unnikrishnan and released at Binnale in Kochi on Sunday, is a breezy collection where one needn’t think and p

KOCHI: The anthology of poems titled ‘Ten Sentences About the Cow’, written and translated by N G Unnikrishnan and released at Binnale in Kochi on Sunday, is a breezy collection where one needn’t think and ponder much over the poems. The poems that often evoke the pastoral setting have themes ranging from the normal flow of life, to passion, sensuality and even detachment. 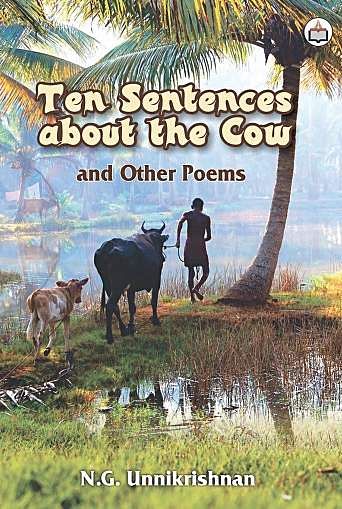 The poems, through which Unnikrishnan is able to forge his way down a rhetorical road, touch a deep chord in the reader’s heart with their simple and plain metaphors. Almost all poems are lucid and can be enjoyed right at the first reading. The collection also shows the poet’s social conscience and his concerns about life in rural settings.

Unnikrishnan, a poet and translator in Malayalam, has four collection of poems under his belt, and he has translated his past collections into English which appeared in IL and Muse India. A retired associate professor, his poems were also included in anthologies like Kavithayude Noottand (Malayalam poetry from 1900 to 2000) and Vettuvazhi Kavithakal.
According to writer K Satchidanandan, who wrote an introductory note for the anthology,  Unnikrishnan’s ‘Ten Sentences About the Cow’ is a fascinating narrative that recalls the poet’s rural childhood and his experiences of growing up. What could have easily become a romantic rendition of nostalgic sentiments has turned into hilarious recounting of people and events, with the figure of the cow at its core.

What make the poems unique is their tone; the poet describes people and events in simple idioms with a kind of good humoured detachment that makes them remote and intimate at the same time. The narratives capture the village life in Kerala as it was lived a few decades ago with complete honesty and the memory gives the narrative a rare, legendary quality. The collection of poems is, at the same time, a tribute to a vanished pastoral culture, K Satchidanandan said.
The book was released by Paul Zacharia at a function in the presence of C S Venkiteswaran, who along with Unnikrishnan, has translated the work. Writers Anwar Ali, Anitha Thampi, artists Riyas Komu and Bose Krishnamachari among others graced the occasion.