‘Zizou is my favourite’

KOCHI:It was his first international offline FIFA gaming tournament in Malaysia, and Anish P was clueless about the proceedings. He finished first in the group game and won two rounds during the knockout as well. “For the quarter-final, my opponent, from Mumbai, was well-versed in his routine. He even helped me with my formations, and sounded encouraging. However, I lost the game and ended up in the eighth position, while he went on to win the final game.” 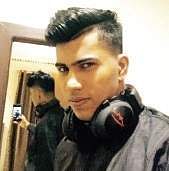 To get to his first International competition, Anish had to win the local game in Chennai, then go on to win the national in Delhi. A Chennai-based Malayali gamer, he has always been into FIFA and gaming. “Almost all of us (gamers) started off as children; we’d be playing for fun, and ove time realise that we’re a bit more into it than most,” he said. “I started playing FIFA with my brother when I was 10. We used to watch a lot of football at the time. As most parents, my mother did not encourage the idea when my brother’s friends suggested I enter the competitions.”
“So, after a few years, I played my first official game at the Satyam Blur, Chennai. It’s a popular gaming cafe. I lost the first game in the semi-final. However, within a month, I won the game at the same place,” he said.

There aren’t as many prizes and accolades when one plays games as part of online tournaments. “It’s the offline games that are more exciting as you can travel, meet fellow gamers and moreover, the prize money is great too!”
The gamer profile of Anish introduces him as Anzo. He laughed as he explained why it is so, “Zinedine Zidane is my favourite footballer and he named his son Enzo. I altered it a bit and made it Anzo.”
So what makes playing football online different from taking to the field? “Playing online is very much like playing in the field. I used to play on the ground, but it starts getting difficult when you’re into gaming. In FIFA online, I will be the sole controller of all the 11 players, while on the field, there has to be a team effort. And sometimes it gets difficult playing the game when it’s someone else’s brain that is working,” he laughed.
And even though he’s much into games, Anish is an MBA degree holder in logistics and shipping management. So what next? “I’ll be open to taking up a job, but at the same time, if I could find myself a sponsor who’d represent me on the international level, I’d be overjoyed.”