The Biennale is a large cultural movement: Riyas Komu

Riyas Komu, the co-founder of the Kochi Muziris Bienalle reflects about the third edition.

KOCHI: One of the unusual experiences, for Riyas Komu, the co-founder of the Kochi Muziris Biennale, at this year's edition, has been to watch people as they enter the ‘The Pyramid Of Exiled Poets’ by Slovenian artist Aleš Šteger’. It is dark inside the installation. And on the walls, through speakers, you can hear the anguished voices of poets like Bertolt Brecht, Czesław Miłosz, Mahmoud Darwish, and Joseph Brodsky. 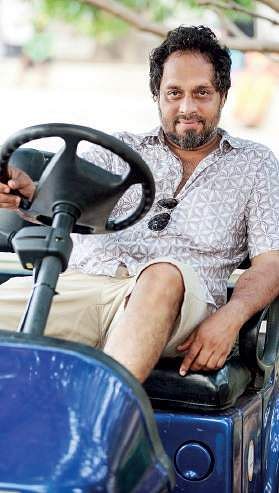 “Many visitors felt so uncomfortable that they would rush back out through the entrance itself,” says Riyas. “This work takes you into dark realities. It is almost like a memorial to the time, because poets, as well as liberal voices, are being suppressed all over the world.”

It is a warm Wednesday evening at Aspinwall House, Fort Kochi. And Riyas is in a relaxed mood. Wearing a purple shirt and Bermuda shorts, he had just concluded an interaction with noted Bollywood film director Vidhu Vinod Chopra.

As he stands next to a buggy, a young couple ask him whether they can use it, to go to other venues. Riyas agrees but, unfortunately, the driver has gone out for a cup of tea. As the couple move away, Riyas ruminates on the impact of this year's edition. “Many people had come with the mind-set of the Biennale being a spectacle, and of looking at a work and understanding the story,” he says.

“But this Biennale [curated by artist Sudarshan Shetty] has been different. It is asking many questions and has made people puzzled. Nevertheless, there are many art works which are pulling people in.”

For Riyas, the most stunning has been the 'work in progress' by mural artist PK Sadanandan. “He has engaged with a contemporary art project with a great mind of a traditionalist,” says Riyas.

“Sadanandan broke all the rules of the Kerala mural art tradition in the way the work is laid out. Normally, the images are very flat, but his is three-dimensional.”

For most artists, it is difficult to do their creative work in front of the public. But Sadanandan has allowed visitors to see how the colours are formed and filled in, and how the brushes are made. Despite thousands of people walking past, he is able to concentrate on his work. “That is because he is a master,” says Riyas. “It reminds you of the time [in the 15th century] when great artistes like
Michealangelo and Leonardo Da Vinci made art in front of the public. And he is narrating a story, with so much contemporary relevance ('Parayi Petta Panthiru Kulam', a Kerala legend, of the 12
kulams – families born to the Parayi, or women of the 'pariah' caste). Sadanandan's work will
remain as one of my great memories of this Biennale.”

Another aspect, which is new to this edition, has been that many artistes, curators, museum directors and academicians from all across the world had come to see the Biennale. “It is an event that can no longer be missed,” says Riyas. “Artistes like Ali Steger and Raul Zurita have not shown in Bienalles before. We have introduced many different dimensions to art-making. So far, in the past six years, we have produced more than 250 projects.”

As for the future, Riyas says, “The Biennale is now a large cultural movement led by the people. We [Bose Krishnamachari and himself] were just the catalysts to make it happen. I am sure the future is bright.”