KOCHI: Several years ago, the Kuttanampurathu chira, a one-acre pond at Maneed panchayat, near Piravom, met the water requirements of over 100 families. They also maintained the pond. As a result, the underground water level never went down. The water from the pond was also used to irrigate the paddy fields nearby.

But slowly the people began to neglect it. It turned into a dumping ground for waste. Eventually, the pond died. And the people began to face an acute potable water shortage.
However, things are going to change, because the district administration, led by Ernakulam District Collector K Mohammed Y Safirulla, have embarked on ‘100 ponds in 50 days’ project. “Our aim is to enhance the ground water level,” says Safirulla. “This, in turn, will solve the water shortage.”
This project is a follow-up of ‘Entekulam’, which was pioneered by former District Collector M G Rajamanickam. The idea came up when the cause of the devastating floods at Chennai, in 2015, was attributed to the encroachment of water bodies.
Under the ‘Entekulam’ project 53 ponds were revived. Safirulla expedited the process and, so far, 85 ponds have been revived in 37 days.

Safirulla’s sense of urgency came when one day he went through the list of the number of ponds in the district. “I came to realise that of the 2,500 ponds only 600 exist today,” he said. “This forced me to initiate steps to protect the existing ponds and that too with the help of the local people. If we didn’t do it, there would be widespread water shortage in the district.”
He said that in the initial stage the question of funds loomed up. However, luck was at hand. When Safirulla attended a function, at the Cochin Shipyard, on World Water Day (March 22), he spoke about his plans to revive the ponds.

“Without any hesitation, the Shipyard extended help by investing their CSR funds,” says Safirulla.  “This was a major fillip.”
However, what proved to be a herculean task was to form a team. “We needed 150 volunteers to clean 15 ponds a day,” says the Collector.
But there was nothing to worry. Very soon, many youngsters become volunteers and ensured that the project moved ahead. “Many local people and others joined,” says Safirulla.
The groups included Haritha Keralam Mission, Nehru Yuva Kendra, local government bodies, NSS volunteers, colleges, and Anbodu Kochi.

In a bid to save water resources and thereby ensure potable water supply to the residents, the administration is planning to geo-tag all the ponds in the district.
The initiative comes following reports of encroachment on water bodies from various parts of the district. “We are planning to bar code each pond in the district. By doing so we will able to monitor the waterbody from anywhere in the district and take measures to prevent encroachments immediately,” said District Collector K Mohammed Y Safirulla.

According to him, the ponds which had been cleaned under the ‘Entekulam’ and ‘100 ponds in 50 days’ projects will be bar-coded.  “Around 20 years back the district had 2,500 ponds. Now only 600 remain. Since we are facing the severest drought in 115 years, rainwater harvesting and revival of ponds are the only options left,” Collector added.
He said the district administration will take steps to spread awareness among the public to maintain water bodies for the future needs. “Youngsters are coming forward to make the project a success. We will take steps to reach out to a larger audience by means of several programmes,” he added.

How to maintain the revived ponds?
“In order to avoid relapse, we made the local people aware of the importance of maintaining the pond and entrusted them with its welfare. I am really happy to see that they are maintaining the ponds in good condition,” Safirulla said.

Anbodu Kochi: A role model
“The volunteers of Anbodu Kochi helped me a lot and their experience made the process easy. The work they had done earlier by cleaning around 53 ponds also was an inspiration,” the Collector said. 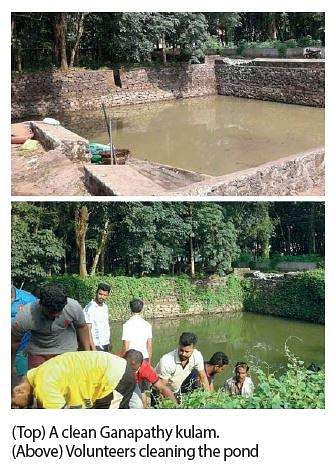 Ponds cleaned under the ‘100 ponds in 50 days’ project