Islamic music with a carnatic touch

Vocalist Vazhamuttom B Chandrababu has come up with Islamic Concerts where Islamic compositions will be rendered in Carnatic format.

KOCHI: He renders Rabbe, allahuve karunyaparane in a raga so familiar. You are instantly reminded of Karuna cheyvan enthu thamasam Krishna, Irayimman Thampi’s most celebrated keertana set to Sri Ragam and Aadi Thalam. Vazhamuttom B Chandrababu says both follow the classical format, sthutis invoking the supreme power. While the known composition praises Krishna, his version has Allah, the sole creator of universe according to Islamic faith. “I think it’s the first time in India  a classical vocalist is conducting an Islamic concert. I have been working on this concept for the last seven years and the first concert was held this month at Muslim Association Hall in the Capital city,” says the vocalist. 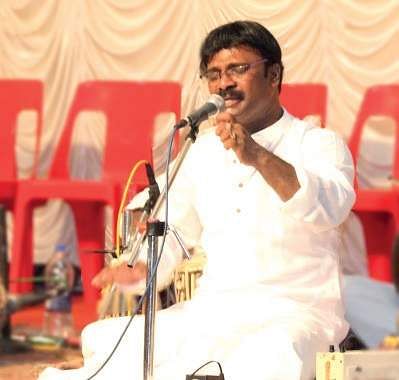 Over the years Chandrababu has penned and composed around 25 Islamic keertanas in various Carnatic ragas. “They all start with varnam and end with thillana, just like any other Carnatic concert. The only difference is the lyrics as you will find Allah instead of Krishna, Ganapati or Saraswati.
The accompanists don’t need to put in any extra effort as the classical template is in tact,” says the musician who adds he already has an Islamic oeuvre to last a three-hour concert. “Till now I have composed around 125 keertanas in various categories. Today at Nishagandhi I will be rendering some on Sri Narayana Guru,” he adds.

Also a music teacher, Chandrababu says Christian and Muslim compositions will help students from that religions to approach music with more passion. “When they sing Ya Rahman Allah, ya Rahim Allah instead of Vatapi Ganapati it gets more acceptance in their households and community. And when they are singing about their own faith they will be totally involved in the process,” he says.

The biggest challenge for Chandrababu was to blend Arabic in Malayalam lyrics. “Allah has 99 synonyms in Arabic. So Arabic names were integrated into Malayalam lyrics to make it authentic,” he says. It was Islamic scholar Saeed Musliyar from Vizhinjam who helped the vocalist during his long research. “He was the first person to listen to all my Islamic compositions. He was like a guiding light and I have incorporated all his suggestions in my works,” he says.

For his first concert Chandrababu went for the best instrumentalists as he was accompanied by Attukal Balasubramaniam on violin, Nanjil Arul on mridangam, Adichanalloor Anilkumar on ghatam and Mahesh Vani on tabala. “The response was tremendous and I was invited for four concerts at the same venue,” he says. But more than the acceptance his new musical style is gaining, the vocalist is excited about the fact that more and more students are now interested in learning classical. “No there are students who join the class for Islamic keertanas and even  music teachers are approaching me for this,” he winds up.

Now we are on Telegram too. Follow us for updates
TAGS
Kochi Islamic Music Karnatic