Keralites are no longer keen on donating organs

An officer with the Kerala Network for Organ Sharing said, “While some families find it difficult to make such a decision in a vulnerable situation, a certain others are bound by religious constraints

KOCHI: Organ donation in the state was at its peak in 2015-2016 with campaigns making a big impact on people. If the number of donations was 218 and 199 in 2015 and 2016 respectively, the year that went by saw a drastic fall as the figure touched 60. It turned worse this year and the state had to wait three months before the first donation was made on Tuesday.

The donor, Arunraj, 29, had been declared brain dead and when his family expressed willingness to donate, his organs were harvested and given to seven people across Kerala and Tamil Nadu.

“Last year too we faced many difficulties with organ donation. The notification from hospitals in case of brain death was a major issue even when donation was at its peak in the state. Now the notifications don’t come,” said P V Aneesh, transplant coordinator with Kerala Network for Organ Sharing (KNOS) registry.
“A litigation alleging malpractice and medical fraud, which was ruled in favour of the state by the High Court, had led to doctors shirking away from brain death confirmations and advising organ donation.

No one likes the implications associated with the allegations that often go viral on social media. Who would want their ethics to be questioned. We now wait for the donor’s family to come forward,” he said.
Each organ donation has a systematic process. 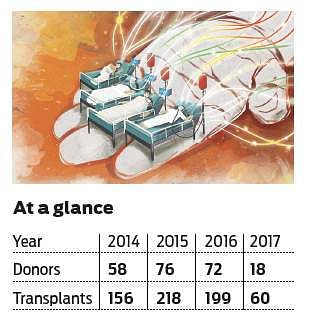 If a person is declared brain dead, then empanelled doctors (government doctors with accreditation to confirm brain death) does apnea test twice in 12 hours on a regular interval.

The entire process is video-recorded as proof. The method is considered fool-proof and it is to ensure no medical fraud or malpractice happens on the transplantation front.

An officer with the Kerala Network for Organ Sharing said, “While some families find it difficult to make such a decision in a vulnerable situation, a certain others are bound by religious constraints. Social media makes people doubt the whole process.”

“A total of 743 donations have happened through KNOS in the state. We can assure all of them were done as per the norms. The hesitation of the doctors and hospital authorities is understandable. However, organ donation is something that can save many lives and people should understand the nuances before jumping the bandwagon of protestors.”

Now we are on Telegram too. Follow us for updates
TAGS
Kerala Tamil Nadu organ donation