When the husband is harassed

Even as the Supreme Court has placed restrictions on the use of Section 498A of the Indian Penal Code, it is a weapon that many wives like to use against husbands during a marriage breakdown.

KOCHI: When IT professional Manesh Nair and his parents saw the profile on a matrimony website, they felt Soumya would be a suitable bride. The caste and community matched and later the horoscopes, too. So, there was no problem in any way. When the pair met for the first time, Manesh liked Soumya. And apparently, so did Soumya. The marriage took place in September 2012. The couple went to live in Chennai where Manesh worked. “Right from the beginning, Soumya showed a reluctance to have any sexual contact,” he says. “She stated that she did not want children immediately, and insisted that I use a contraceptive. It seemed she was not interested in having a relationship.” Manesh felt puzzled and a bit depressed too. Then he began to get suspicious.

So, he looked into her resume once again. “Soumya told me that she was working as a chartered accountant in a company at Coimbatore,” says Manesh. “But when I called the firm they said they had no employee by the name of Soumya. Further investigations revealed that she had not even done a chartered accountancy course. My father-in-law was supposed to be the general manager of a company. But that turned out to be false. He had printed a fake visiting card.”Things went from bad to worse. Within months, Soumya said Manesh and his father had stolen her jewellery.

“This was absolutely untrue,” says Manesh.
Then she alleged physical violence and filed a complaint under Section 498A of the Indian Penal Code. Manesh had no option but to file for divorce. Because his in-laws had filed a case against his father, the latter had to go to court often. “My father has led a life of integrity,” says Manesh. “Now he was being harassed by my wife’s family.” 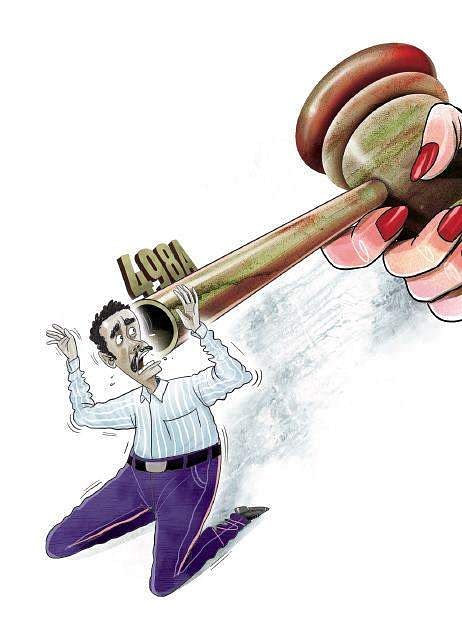 Soumya’s family wanted Rs 50 lakh as alimony. Then they raised it to C80 lakh. “My life has been a hell for the past six years,” says the Kochi-based Manesh. “And I go through a lot of tension because of Section 498 A [of the Indian Penal Code].” The law goes like this: ‘Whoever, being the husband or the relative of a woman, subjects such a woman to cruelty shall be punished with imprisonment for a term which may extend to three years and shall be liable to a fine. The offence is cognisable, non-compoundable and non-bailable.’ Businessman Anil Menon, who has had an acrimonious divorce, says, “Section 498 A is a tool that has been misused by women.”

Another one who has suffered is the Thiruvananthapuram-based doctor Soman Nallapat. Frequent verbal spats with his wife, Revathi, caused her to file for divorce. She filed a case under Section 498 A, citing cruelty by her husband and lodged an FIR.  One morning, at 6 am, the police came and arrested Soman. “My reputation has been destroyed, in the area I live,” he says. Soman spent a day in the lock-up before the bail application came through. Soman, who works as a chartered accountant in a reputed firm, had bought an apartment in which his wife and he were the co-owners. “But Revathi’s parents insisted the apartment be given over to her. Eventually, to buy peace, I did so.” The couple has a seven-year-old daughter.

But now times are changing. “There have been changes in the interpretation and enforcement because of certain judgements by the Supreme Court,” says lawyer Deepak George.In September, 2017, a two-member bench comprising Justices A K Goel and U U Lalit stated that every complaint under Section 498A of the IPC received by the police or the magistrate had to be looked into by a three-member family welfare committee.

The committee members can interact with the duelling couple, personally or through phone or e-mail.
Only after the committee submits a report, within a month, can any action be taken. “No longer is a husband arrested as soon as a complaint is filed,” says Sunil.But P R Gopal, the secretary of the NGO Purushavaksa Samrakshana Samithi, says, “The problem is that the system can be bent because the police are corrupt. So, an arrest can be done.”  Meanwhile, Anil says, with a touch of wit, “It is better to take dowry. In case, the marriage does not work out, you can return the money, which is hers, rather than give some of yours.” (Names have been changed)

Fighting for the male gender
The NGO Purushavaksa Samrakshana Samithi was set up in 2011. This is part of an umbrella group of the ‘Save Indian Family’, which works against the misuse of women protection laws. “We do legal counselling for harassed husbands,” says secretary P R Gokul. “Then we submit appeals and memorandums, on behalf of husbands, to government departments. I believe husband harassment has gone down thanks to the work done by members of our NGO as well as the ‘Save Indian Family’.” Gokul is not a fan of Section 498A of the Indian Penal Code.

“In this section, only the rights of wives are protected,” he says. “I believe both husband and wife should have rights, not just the wife. All human beings should be protected. This act is principally wrong. And from my experience, about 95 per cent of the time the allegations made by the wife against the husband are false. Too many women are misusing it.” Global contact: 8882498498 (extension 9 for  Malayalam)

Now we are on Telegram too. Follow us for updates
TAGS
Chennai physical violence divorce