Drawing through the lines

Artist Pradeep Purushothaman’s calls this art ‘Mozhivara’ where caricatures of legendary writers are made using popular lines from their literary work.

KOCHI: There was a beautiful caricature of Madhavikutty hung on the wall. With flying hair, smiling face and saree draped in her trademark style, the caricature was picture perfect. But as the spectator goes near the picture, one can see the caricature is drawn using the famous lines penned down by the legendary writer.

The artist Pradeep Purushothaman, whose works are exhibited at the Madhavan Nair Foundation, here calls this art ‘Mozhivara’ where caricatures of legendary writers are made using popular lines from their literary work. “Lines from Neermathalam Poothakalam was used for making Madhavikutty’s picture with one quote highlighted underneath the picture,” Pradeep said. The caricatures of eight artists are displayed and all of them are noted Malayalam authors. Writers including O V Vijayan, M T Vasudevan Nair, Sugathakumari and O N V Kurup are part of it. 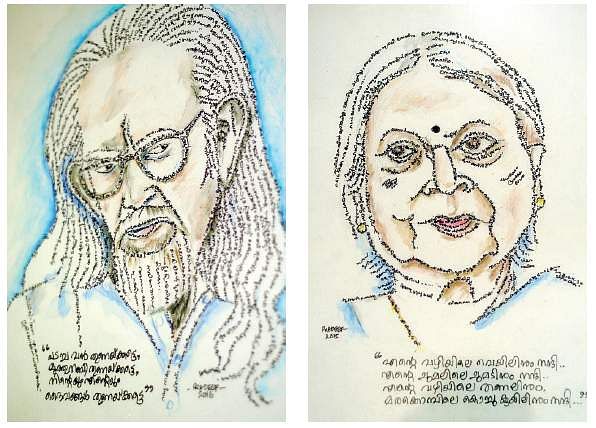 Pradeep recollected it was in 2015 that he made his first such work. It was a caricature of  Vayalar Ramavarma to gift to music director Bijibal at a function held in commemoration of the legendary musician. “When I was assigned the duty to make a painting of Vayalar, I thought of doing something different and made a caricature of him using the poems he wrote,” he said. The caricature got appreciated widely. Now it is housed at the residence of Vayalar Sarath Chandra Varma, son of Vayalar.
After this, he started working on the ‘Mozhivara’ art. The caricatures he made in the last two years have found a space in the exhibition. The artist also mentioned he used watercolours for shading in some of the works.

“When I make a caricature, I think from a reader’s perspective, understand the depth of the lines and paint it on the canvas,” Pradeep said. The artist has also displayed 100 caricatures he drew in the past few months. A ‘100 days of caricature expo’ was done through his Facebook profile in which he made caricatures of his friends.

The artist says his next ambitious work is to make a caricature of writer Perumbadavam Sreedharan using the phrases from his noted novel ‘Oru Sangeerthanam Pole’. The lines will be selected by the writer’s daughter Lakshmi Perumbadavam.Pradeep, a self-taught artist, who hails from Pathanamthitta says he loves to keep experimenting with the art.

Now we are on Telegram too. Follow us for updates
TAGS
art Pradeep Purushothaman caricature