Everything is novel about the ongoing arts festival being held on the main campus of the Sree Sankaracharya University of Sanskrit at Kalady.

KOCHI: Everything is novel about the ongoing arts festival being held on the main campus of the Sree Sankaracharya University of Sanskrit at Kalady. Day two of the festival saw many events including folk song solo, classical song solo, western music, besides various dance items going on stage.

Over 1,500 students from all the eight regional centres and besides those from the main campus are competing in the festival, which has been named 'Long March'.  According to Anjuna K M, who is the union chairperson, the title 'Long March' was inspired by the protest march taken out by the farmers in Maharashtra. "The march drive home a huge message. 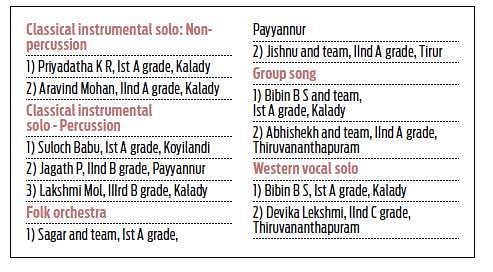 To show our support for their cause, the participants walked on barefoot during the procession that was taken out as part of the festival," she said. The procession too was conducted as a competition event. Poet Veerankutty, during his keynote address on the inaugural day, said, "The name upholds the political realities of contemporary India. The 'Long March' as the name for an arts festival is very inspiring." Even the names of the stages, where the events are being held, have a difference.

The day before the formal inauguration of Long March, the university union held a harvest festival. During the festival titled 'Kalavara', vegetables grown on the campus by the union members were harvested. The organic farm initiative was taken up by the union under the leadership of J G Nithin, who was the recipient of the best organic farmer award. The food, which is served to the participants at the festival, is being prepared using these vegetables.

Now we are on Telegram too. Follow us for updates
TAGS
Kalady Sankaracharya University