KOCHI:When Kannappa Palaniappan was working as an onboard scientist with the National Institute  of Ocean Technology (NIOT) he came across massive remotely operated underwater vehicles (ROV) weighing around one tonne that were used to inspect the hull of the ship and for surveillance. Kannappa found this a pain point in an industry which had a huge number of ships and invested big bucks for ship inspections. 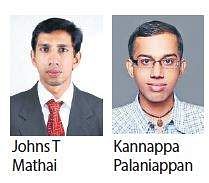 “This motivated our chief technical officer (CTO) to present the idea to his college mate Johns T Mathai, who was working with the Grey Orange Robotics at that time after moving from Samsung R&D,” said Rohit Surendran, chief marketing manager IROV.

Together they decided to explore and pitch their idea to the Maker Village in Kochi. “Their idea got incubated in October 2016. From then onwards they started working on the initial proof of concept (POC) and prototype,” he said.

“The EyeROV TUNA is the product available in the market from the company. EyeROV TUNA is a highly versatile and modular ROV with an array of sensors and attachments possible,” said Rohith. The drone has an onboard 1080p HD camera with live video feedback. The product is highly customisable as per the requirement of the user. The key aspect of the product is the ease of operation and the user-friendly reports it produces through its software pack.

According to Rohith, EyeROV is an official trademark of the company IROV TECHNOLOGIES PVT LTD. “The trademark is associated with the portable ROV (Remote Operated underwater Vehicle) series of products eg: EyeROV TUNA, EyeROV MULLET, etc,” he added.

According to Rohith, in the first two years, funds were pooled in by the founders (which was mainly their personal savings and loans from friends and family). “The company is fully bootstrapped. Later in the first quarter of  2018, the company won its first ‘seed fund as grant’ from BPCL under Project Ankur, KSUM and seed loans from Maker Village,” he added.

The company, which began as a two-member team, later on, expanded to its current number of 10. The company aims to be leaders in underwater inspection and robotics. “Develop locally, sell globally underwater drones/ROV and data analytics platform,” he said. “So far we haven’t partnered with anyone. We are definitely searching for new opportunities for expansion and are also giving significant effort to scale up,” he added.

“The company also has reputed advisors from ex-DRDO, ex-Navy and Marine Industry. It is at present incubated at Maker Village and is being accelerated by Brinc hardware accelerator based in Hong Kong,” he said.

Now we are on Telegram too. Follow us for updates
TAGS
National Institute  of Ocean Technology remotely operated underwater vehicles underwater drones