The ten-day-long Krithi International Book Festival at Marine Drive in Kochi concluded on a grand note drawing huge crowds, including youngsters, and selling a record number of books.

The ten-day-long Krithi International Book Festival at Marine Drive in Kochi concluded on a grand note drawing huge crowds, including youngsters, and selling a record number of books.The roaring success of the festival has already triggered a clamour for making Kochi the permanent venue of the festival

KOCHI:Amid the increasing concern about the decline in reading culture among the youngsters in Kerala, the ten-day long Krithi International Book Festival, the first-ever international Book fair organised by the Sahithya Pravarthaka Cooperative Society (SPCS) at Marine Drive in Kochi concluded on a grand note drawing huge crowds including youngsters and selling a record number of books. 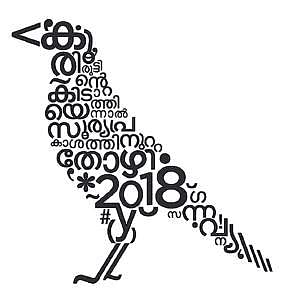 According to the organisers, around seven lakh literature lovers thronged the venue, scouring through volumes of titles ranging from classics in world literature, prose, poetry, works by contemporary writers and Indian literature. Around Rs 17 crore worth books have been sold and the kind of response from the denizens in Kochi, a city known to be the commercial capital of Kerala has surprised even the organisers. The roaring success of the festival has already triggered the clamour for making Kochi a permanent festival venue.

The long queue of students at the book festival has also been a pleasant surprise and the government’s scheme to gift one book worth Rs 250 for each student has helped attract the younger generation. Books worth around Rs 70 lakh was distributed to the students under the scheme.“It has turned out to be a celebration of Malayalam literature. The long queue of book lovers at Krithi has underlined the positive influence of reading culture in Kochi despite its growing cosmopolitan culture. Minister Kadakampally Surendran has assured us the government will consider making Kochi the permanent venue of the book festival. We are planning to organise the next festival in January, much ahead of the exam period,” said poet S Ramesan, who is also the general convener of Krithi Book Festival.

The response to the Literary Festival held at Bolgatty Palace from March 7 to 10 was also overwhelming. Around 12 international writers, 250 from other states and 600 from Kerala gathered at Bolgatty Palace and conversed on various subjects, ranging from world literature to political issues.The only complaint was regarding the distance between the venue of the book and literary festivals. Though the organisers had arranged free conveyance from Marine Drive to Bolgatty Palace by road and the backwaters, many found it tough to reach the literary fest venue.

Rs 17 cr worth books have been sold

Rs 70 lakh worth books were distributed to students

12 international writers, 250 from other states and 600 from Kerala   participated

Now we are on Telegram too. Follow us for updates
TAGS
Marine Drive Krithi International Book Festival