In Tamil Nadu, 20 per cent of the bottles are recycled for road making.

KOCHI: Rotary Club member Simi Stephen stood on the stage of the St Peter’s Senior Secondary School at  Kadayiruppu next to a row of students in white and green uniforms as they began to sing:
Bits of plastic
Bits of plastic
Plastic everywhere
Plastic everywhere
Pick them up
Stamp on them
Keep them in your bag
Keep them in your bag
Let’s recycle
Let’s recycle
(The tune was based on the popular nursery rhyme, ‘Bits of Paper’).

The auditorium was filled with students who made movements as if they were picking up waste from the ground, then they rolled their arms in a circular motion to show that recycling was taking place.
Simi Stephen and her colleague Maya Varghese are on a plastic collection drive. They belong to the Rotary Club of Cochin North which has a ‘Conserve’ programme run by the women called the Rotary Annes. But now they have become the Ernakulam District Coordinators for the ‘I Challenge Plastic Bottles’ campaign initiated by Fr. Davis Chiramel of the Kidney Federation of India. It was launched on October 2 all over Kerala. 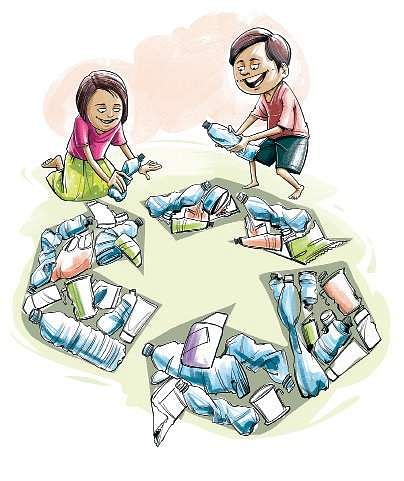 So Simi and Maya have gone to different schools, colleges, youth clubs, and resident associations and talked about how plastic bottles can be recycled.At the Santa Maria Senior Secondary School, at Mundamveli, the principal Sr Rosamma said to the students, “After the floods, the plastic bottle has become a great threat to Kerala. We have to do something to save ourselves as well as the earth. I will ask Simi ma’am to talk more about this.”

Simi nodded, smiled and said, “Please do not throw away plastic bottles. If you throw it, it takes 1,450 years for a plastic bottle to decompose completely. These bottles have chemicals in them. When it leaks into the soil, it will enter the food chain and into our bodies. And when it rains these chemicals pollute the ponds and rivers. Burning it results in harmful chemicals entering the atmosphere.”

But there is a way out. Many things can be recycled using the bottle. “With 63 mineral water bottles you can make a sweater,” says Maya. “And you need less than 30 bottles to make one T-shirt. After it is recycled, usually into threads, it can be sold to manufacturers who make buttons, mugs, buckets, stick files and polythene covers.”

In Tamil Nadu, 20 per cent of the bottles are recycled for road making. “If we can do this in Kerala, all plastic can be reclaimed or recycled,” says Maya. “All roads will become very strong and be able to withstand the strong monsoon rains. Plastic can also be used in construction. Instead of brick and cement, hollow bricks can be made from plastic.”But the biggest problem is that when the waste is given for collection, it is not segregated.

“In Kerala, there is no awareness among the people on how to segregate the different types of plastic,” says Simi. “And it is necessary that we do so. Because there are different types of recyclers for different plastic products. So, one recycler may only take plastic and soft drink bottles. Another may take plastic covers. A third uses milk packets, bread covers and grocery packs. Another recycler only wants Harpic, shampoo, and five-litre bottles.”Most people assume that labour can be used to segregate the waste materials. But that is not financially viable.

“The payment for the labour is between C8 to C11 per kg,” says Maya. Apart from this, it is difficult to get an open space to do this type of work. “No landlord would like to give his place for this type of work because he knows that it will become a dumping ground, as well as a health hazard,” says Maya.
Meanwhile, the duo’s talks at the schools have borne results. From St Peter’s school alone, they collected 535 kgs of plastic bottles. Over 2.5 tonnes have been collected from different schools and colleges in Kothamangalam, Kolencherry and other places in Ernakulam district in the past three weeks. These are put in large white sacks and transported by the Kerala Scrap Owners Association to various recyclers who pay C10 per kg. This money is sent back to all the contributing schools.

Interestingly, the pair was surprised at the change of attitude among the students. This has come about because of the floods which devastated the state in September. “They told us that even as they observed the overflowing rivers, they were astonished to see the huge amount of waste, like plastic bottles and packets which went past. So, they are very aware of the damage that is being done to the environment. Hopefully, future generations will ensure that we will have a plastic-safe world.”

A huge mass of plastic
The Great Pacific Garbage Patch is the largest accumulation of ocean plastic in the world. It is located between Hawaii and California and covers an area of 1.6 million sq. kms. It has around 80,000 metric tons. Every year around 2 million tonnes are entering the oceans from rivers. Since the mass is less dense than water, it does not sink to the bottom. One crate which was picked up recently had been made in 1977. It had not disintegrated at all.