UK firm to generate electricity from garbage dumped at Brahmapuram

If all goes as per plan, the 6 to 8 lakh tonnes of garbage and plastic waste dumped at the Brahmapuram waste treatment plant will be recycled and converted into electricity within four years.

KOCHI: If all goes as per plan, the 6 to 8 lakh tonnes of garbage and plastic waste dumped at the Brahmapuram waste treatment plant will be recycled and converted into electricity within four years.
The officials of GJ Eco Power, a UK-based Waste-to-Energy company which was awarded the tender to construct the WtE plant at a cost of Rs 395 crore, has fixed four years as the deadline to end the waste menace of the IT city. 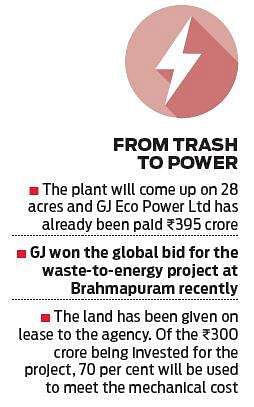 “We have received almost all the clearances for operating the plan. Environment clearance for the plant will be also received within a month. If all goes as per the plan, we will start the operation within a year and the power generation in another six months,” said Amith Viswanath, GJ Eco Power spokesperson.
According to him, the plant can treat over 500 tonnes of garbage a day. “As per the agreement with the Corporation, the civic body has to provide 300 tonnes of waste to the plant daily.  But as per the plant’s capacity, we can treat more than 500 tonnes of garbage a day once it is operational. So, the waste that has been dumped since 2005 will be slowly converted into energy. Since the waste accumulated at the plant is between 5 to 8 lakh tonnes, we can recycle it within 4 to 5 years,” Amith said.

The plant will come up on 28 acres and GJ Eco Power Ltd has already been paid Rs 395 crore. GJ won the global bid for the waste-to-energy project at Brahmapuram recently. The land has been given on lease to the agency. Of the Rs 300 crore being invested for the project, 70 per cent will be used to meet the mechanical cost.

“The Kerala State Electricity Regulatory Commission is also in the final stage of giving clearance to provide electricity to KSEB. Within a month, that too, will be cleared. As many as 8 MW energy can be generated by the plant,” said the spokesperson.

Stay up to date on all the latest Kochi news with The New Indian Express App. Download now
(Get the news that matters from New Indian Express on WhatsApp. Click this link and hit 'Click to Subscribe'. Follow the instructions after that.)
TAGS
Brahmapuram Garbage