In the meeting, officials were directed to complete the projects implemented using MP fund before January 31, 2019.

KOCHI: K V Thomas MP on Monday said 90 per cent of the MP Regional Development Fund granted has been utilised. He revealed this in a meeting conducted to evaluate the utilisation of MP fund held at District Collectorate, Kakkanad, on Monday.

In the meeting, officials were directed to complete the projects implemented using MP fund before January 31, 2019. In the last five years, 457 projects were charted out using the fund. Of this, administrative sanction was granted to 215 projects. As many as 128 projects were completed and 87 projects are in the implementation stage. The remaining projects have to be completed in the next three months’ time period.As part of the Regional Development Fund of MP Thomas, Rs1835.99 lakh was received. Of this, Rs 1626.87 lakh was utilised. KV Thomas directed authorities to speed up purchasing of tricycles for disabled persons. Another meeting to evaluate projects by Kochi Corporation using the MP fund will be held on November 12. 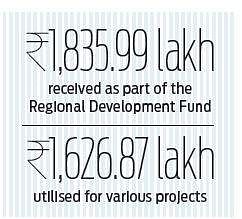 Stay up to date on all the latest Kochi news with The New Indian Express App. Download now
(Get the news that matters from New Indian Express on WhatsApp. Click this link and hit 'Click to Subscribe'. Follow the instructions after that.)
TAGS
Kochi Corporation