And the angels called her

Despite having left the country several winters ago, Meena Alexander visited Kerala frequently.

KOCHI: “... Buses with pilgrims hurtle past

You squint at a boy pedalling his cycle rickshaw
Close, far too close, drops of mud splatter us both.
You lean sideways, touch my cheek—
Let’s live in Kochi by the sea
Find a house with a white balcony,
I think the angels will call on me.”

And so did the angels call. On November 21, Meena Alexander, poet, essayist, and scholar left for the heavens in New York. The above lines from the poem, Kochi By The Sea, written as an elegy for her sister is a testimony to the poet she was - descriptive and touching the very essence of one’s heart, chasing a distinct nostalgia. 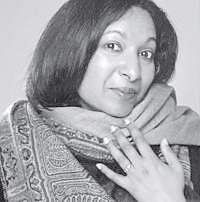 A diasporic poet, Meena grew up in Kerala, Sudan and eventually settling down in New York with her husband and children, her poems have the staggering, unmistakable presence of identity, home, and memoirs. Home was ‘always a little bit beyond reach, a place both real and imagined, longed for, yet marked perpetually as an elsewhere, brightly lit, vanishing’. Perhaps she found home in language, having attained literacy in her mother tongue of Malayalam, Hindi, French, Arabic and English. The polyglot had her first poems published in the Khartoum Daily, during her childhood in Sudan. Since then, poetry had become her way of life. Her friend of over 30 years, Jancy James, the first VC of the Central University of Kerala, says that the poet lived her life like a poem. “She saw reality through the eyes of a poet. She constantly urged herself to write poems, every moment of her life,” Jancy reminisces.

Despite having left the country several winters ago, Meena Alexander visited Kerala frequently. “She loved being in Kerala. The primary reason was her mother at home in Thiruvalla. Apart from it, the culture, mythology, customs and traditions of Kerala were something she imbibed and desperately wanted to transcribe into poetry,” Jancy says.

Having worked as a professor in English and Women’s Studies at the New York University, Meena lived two lives, that of an academician and a creative writer. “Nevertheless, she couldn’t segregate these lives. Her lectures reminded one of a poetic discourse,” Jancy says.

In the wake of her death, poets and writers have expressed condolences on the great poet Meena was. Sri Lankan American fiction writer, essayist, and journalist V V Ganeshananthan tweeted a memory, “I met Meena Alexander years ago when we did an event together in New York. Some of the event logistics went askew, and she rose to the occasion to do more than her part, with extraordinary kindness and graciousness,”. Indian writer Amitav Ghosh added that the late poet was an exceptional person in every way, as a poet and a human being and that he would miss her.In her words, she wrote, “What was close to the heart and the bone.”