On any given day, the District Collector, who resides at the Collectorate Bungalow near Durbar Hall, would take just 30 minutes to reach his office at Kakkanad.

KOCHI: On any given day, the District Collector, who resides at the Collectorate Bungalow near Durbar Hall, would take just 30 minutes to reach his office at Kakkanad. But, for the last several months, the duration has gone steadily up to more than an hour,  that is if he opts to take the Palarivattom-Kakkanad route.

And, at times when this route becomes entirely unmotorable, the district head is forced to opt for a different route, a luxury not every common man can afford. For most people, the only way to reach Kakkanad, the hub of IT and many government offices, is to negotiate the pothole-ridden and back-breaking Palarivattom-Kakkanad stretch. With neither the District Collector nor the Public Works Department opting to do something about it, the public continues to bear the brunt. 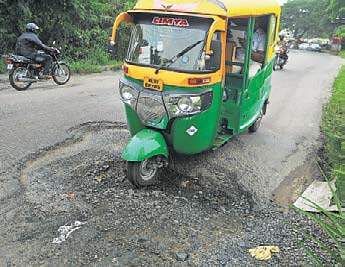 Though protests have been brewing for some time, it reached epic proportions on Wednesday with the private bus owners finally deciding to suspend services on the route indefinitely. From Friday, no private buses will ply on the stretch.

“We can’t take it anymore. We have been complaining about the situation to the Corporation, District Collector and the PWD officials. Despite repeated requests, nothing has happened. The officials initially cited the monsoon rains and floods as the reason for the delay. It has been over a month, but nobody seems to be bothered. We cannot afford to conduct services on this stretch anymore. Let the authorities decide,” said Kerala Private Bus Operators Association president M B Sathyan.

According to Sathyan, the buses plying on the route are in dire need of maintenance every other week. “The drivers are taking a huge risk. The tyres get worn out and the leaf springs get damaged. With fuel costs already affecting our profit, we cannot afford to spend more on maintenance. We were forced to take this harsh decision,” he added.

Not just buses, even private vehicles have a hard time negotiating the stretch. Says Nikhil, an IT professional: “An accident can happen anytime. Many a time, it is sheer luck which saved me. The craters are enormous. This is besides the damage caused to the vehicle.”

◆ It was last year that the road at Kakkanad was dug to lay the natural gas pipeline by GAIL
◆ In 2018 May, the PWD failed to do the pre-monsoon road work. By July, rain strengthened, leaving the road in tatters.
◆ By  August third week, the Private Bus Owners Association met the PWD officials seeking repair of the road.
◆ The association members repeatedly met the PWD officials seeking a solution, but their requests were turned down.
◆ By October 3, the bus owners decided to suspend services via the route

Common man at the receiving end

Whether the delay in repairing the road or suspending the bus services, it is the common man who suffers, said the Better Kochi Response Group. According to Group President S Gopakumar, the decision to suspend services will adversely affect the people. “Most people depend on the public transport system. Suspending the services will only aggravate the issue. The bus owners could have opted for alternative methods of protest,” said Gopakumar.

Procedural delay ?
The stretch has been lying in tatters for months, but the Public Works Department continues to blame it on a procedural delay. Said M.T. Shabu, executive engineer, PWD: “But we have floated the tenders on September 22 and it will be opened on Saturday. A sum of Rs 50 lakh for patchwork has already been allotted and the work will begin soon.”
The PWD official, however, agreed that the bus owners had approached him with regard to the issue. “They have informed us about the decision. The issue will be solved soon. There won’t be any more delay,” he added.
However, he refused to comment on the suspension of two PWD officials - assistant executive engineer S A Saja and assistant engineer M B Sajeevkumar - for laxity on their part in taking up
repair works on the stretch.

More from Kochi.
Now we are on Telegram too. Follow us for updates
TAGS
Palarivattom-Kakkanad District Collector