Cycling towards a revolution

Priya Surendran, a Kochi based former IT professional is grabbing eyeballs with sheer dedication towards the sport by becoming the first ever Malayali woman to become Super Randonneur.

KOCHI: A uniform-clad lady cyclist on a road in Kerala road would have been a rare scenario years ago. Be it safety reasons or the general conservative approach of the society, not many have ventured into the sport. But that has become a thing of past and the state is on a cusp of a revolution in cycling with a lady leading the rest. 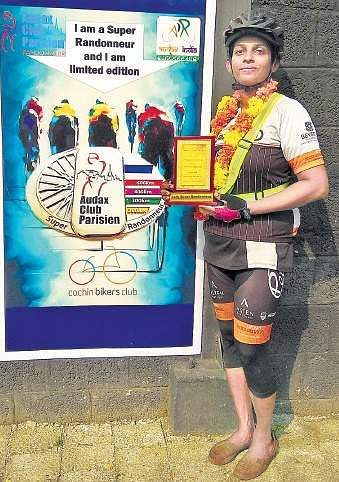 Priya Surendran, a Kochi based former IT professional is grabbing eyeballs with sheer dedication towards the sport by becoming the first ever Malayali woman to become Super Randonneur. "It was pure bliss to realise that I have made it in such a short span of time. Support from my husband Rajesh P K, who was the Super Randonneur in 2017, and tips from individuals like Meera Velankar, the first ever Indian woman to achieve the feat, fuelled me to put in my best effort," remembers Priya.

The Audax Club Parisien(ACP ) from France are the propounders of Brevets Randonneures Mondiaux (BRM) cycling event, popularly known as the 'Brevets'. To become a Super Randonneur, one has to cover Brevets of 200 kms in 13.5 hours, 300 kms in 20 hours, 400 kms in 27 hours and 600 kms in 40 hours within a span of a year from November to October annually.

Cycling has always been her favourite hobby since childhood. Until attempting her luck in a cycling event in December 2015, she didn't have plans to make it bigger. "I used to cycle from home. But it had always been a tough task to ride during heavy traffic. When I participated in the 50 km long Gran Fondo event, I had no idea about the structure of the sport. Gradually, I learned the rules and regulations," she says.

Since the day she mastered the nuances of the sport, she has been going through exciting experiences every week. "The CBC community expanded the horizons of my knowledge and inspired me to confront challenges," asserts Priya. She completed her first Brevet in May 2017 covering 200 kms from Kochi to Thodupuzha. Later she finished 300 kms from Kochi to Kayamkulam in May 2018. Then she entered the 600 kms event on October 6, 2018, from Thiruvananthapuram to Peechi and culminated her Brevet that was 400 kms from Kochi to Neendakara on October 13-14, 2018.

The fledgling talent is aiming for more in future. "As we already have achieved the title of the first Super Randonneur from Kerala, we want to achieve even bigger targets.Currently, We are aiming to participate in 1000 km events in India in the run-up to "Paris - Brest - Paris 2019" -  the 1200 km brevet event that happens only once in four years," she adds.

More from Kochi.
Now we are on Telegram too. Follow us for updates
TAGS
IT woman cyclist Super Randonneur