Finally, Sheshachalam gets a Mr Right for his Guddi

Sheshachalam who gave the scooter his daughter’s namesake adored it despite being asked to keep away from two-wheelers post surgeries.

Guddi was everything one could be proud of. Vintage, yellow and four-decades old, this Bajaj Chetak model was an atypical find, shipped from Dubai in 1978. Guddi was also Sheshachalam’s five-year-old daughter, who passed away in unfortunate circumstances in 1977. 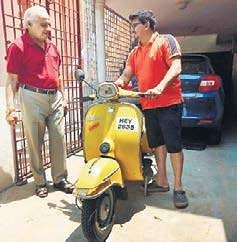 “The scooter is dedicated to our first daughter whose pet name was Guddi. When alive, she would incessantly ask me when she would get her first scooter. I promised her that I would buy the best scooter available. Sadly, she passed away before I bought the scooter,” reminisces Sheshachalam H V, an ex Indian Air force officer.

Sheshachalam who gave the scooter his daughter’s namesake adored it despite being asked to keep away from two-wheelers post surgeries.

“I had decided that I wouldn’t sell Guddi regardless of the situation,” says Sheshachalam who wished Guddi to be immortalised.

She chanced upon a feature that delved into the life of Vijesh K V, a resident of Kochi, who compiles unparalleled scooters and runs a page called Old Town Scooters Cochin on Facebook.
“I sprang from my seat in excitement the moment Smitha texted me that her dad had decided to hand over his 1978 Bajaj Chetak to me,” said Vijesh. The very next day Vijesh set forth to Mysore with his nephew.
What greeted him was a beautiful yellow scooter with a warm, pleasant family.

Curious to know Guddi since her inception, Vijesh delved into Guddi’s past. Sans inhibitions, he instantly fell in love and wanted to keep her. “I was touched that he chose me to look after his Guddi,” shares Vijesh.

Sheshachalam says, “Guddi has saved my life many times thereby giving me the feeling that my daughter is always with me.” If so, how did he trust a stranger with his Guddi? “I knew that Vijesh would keep Guddi safe. I wanted Guddi to be preserved. Vijesh is the right person,” says Sheshachalam.

Sheshachalam didn’t err in his judgement. “From that very moment, Guddi, for me wasn’t just a scooter. It was an emotion I chose to cherish my entire life,” adds Vijesh, proving Sheshachalam right.