Care for the elderly. They need it

Although these activities are illegal and subject to criminal prosecution, the same phenomenon continues unabashedly across the country.

KOCHI: It is very common these days to hear news about old parents being deserted by their own children and abandoning them on temple premises or leaving them alone in markets or bus stands unattended after usurping all their savings and fortunes. Although these activities are illegal and subject to criminal prosecution, the same phenomenon continues unabashedly across the country. 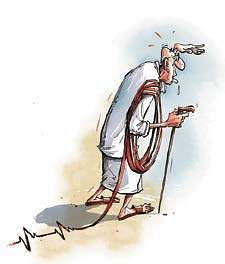 At the same time there is no dearth of celebrating ‘Senior Citizens’ Day’, ‘International Day for the Elderly’, ‘Global Day of Parents’, Father’s Day’, ‘Mother’s Day’ , ‘World Elder Abuse Awareness Day’ for increased public awareness of our duties to senior citizens. Earlier, old people were more respected and sought for advice and guidance, but currently because of the break up of the traditional joint family system the situation has changed. Seventy one per cent of senior citizens living in villages and twenty nine per cent in urban areas are dependent on their wards for survival.

The ‘International Day for the Elderly’ is being celebrated on October 1 from 1991 onwards to consolidate the issues relating to the elderly viz senescence, elder abuse, neglect and rejection and also a day to express one’s gratitude to senior citizens for what they have done to their society, community and for their families.

Once one passes the golden age of 60, they are prone to develop cardiovascular diseases, cancer, arthritis, diabetes mellitus, cataract, osteoporosis, hypertension and Alzheimer’s disease. About 1.5 lakh senior citizens die every day globally and two-thirds of their deaths are due to age related diseases. Cancer, memory loss (Alzheimer) are common problems along with the other comorbidities in the elderly.
In addition to physical morbidities, senior citizens suffer social and mental problems like fear of death, fear of dependence, disability, segregation, and adjustment difficulties in living with their children. The ageing people in India also pose mounting socioeconomic problems including difficulty to bear health care expenses.

Suicide rates are high in the elderly because of the above reasons. Government initiatives like old age pension, concessions in train travel, high rate of bank interests, preference in government and private offices are already available. Institutional care like Helpage India make a long way for the care of senior citizens.

Dr K P Poulose is the principal consultant in medicine at SUT Hospital, Pattom, Thiruvananthapuram. (Views expressed by the author are his own)

Once one passes the golden age of 60, they are prone to develop cardiovascular diseases, cancer, arthritis, diabetes mellitus, cataract, osteoporosis, hypertension and Alzheimer’s disease