The frequency of teenage involvement in majority of robberies in the state point to a very disturbing trend.

KOCHI: The frequency of teenage involvement in majority of robberies in the state point to a very disturbing trend. From sports bikes to jewellery, young boys from well-to-do families are finding themselves involved in high to low profile robbery cases. Psychologists point fingers at high-flying lifestyle, peer pressure and the teens desire to get noticed.

The most common is bike thefts. Police officials say that in majority of the cases the thefts have been committed by teenage boys. Psychologists also attribute the cause to the teens  desire to show off their ‘possessions’ in the social media. 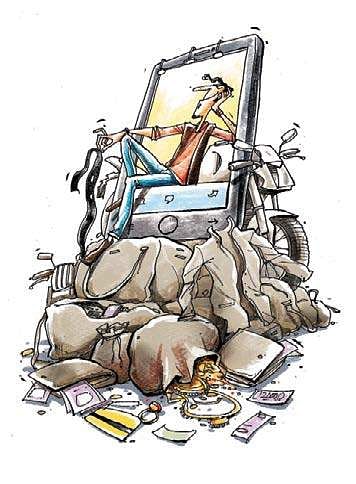 Officers with the Kochi City Police say that 50 percent of vehicle thefts were committed by youth below 25 years. In other cases, the police have arrested youngsters aged below 18 who had teamed up with other members of a vehicle theft gang. “Majority of the youth belong to middle-class families. They are venturing into the field purely for money. Earlier, if it was drugs and parties, today they want to spend a chunk share of money to buy gadgets and smartphones. On the other side, there are youngsters who steal vehicles just to commit crimes,” said an officer.

Recently, a 19-year old Nettur native Fayaz Mubin had been nabbed by the police on charges of sexually abusing a minor girl in Kozhikode. When the police inquired about his background, they found that he was a frequent in bike thefts. He had stolen his latest bike from the yard of a premium motorbike showroom in Edappally.

Similarly, the Ernakulam Central Police arrested two youths who were involved in a bike theft at CMFRI area near High Court junction. Apart from vehicle thefts, the youths were con people and were into chain-snatching. The Ernakulam Central Police has begun an investigation on a young woman who had stolen jewellery from a shop in Broadway, the other day. The investigation is progressing based on CCTV visuals captured by the cameras in the shop.

“Even juveniles have been caught for bike theft in the city. The minors are involved due to their craze for high-end bikes. When they get bored, they abandon the bikes, in some cases. However, the majority of the youth get involved in these crimes to spend it on luxury,” said City Police Commissioner M P Dinesh.

Police say the youth steal vehicles as the accused cannot be traced using the vehicle details. The police have also discovered that the lifted vehicles are used for drug peddling.

The most vulnerable vehicles are those which are parked outside houses and in public parking spaces for several days. As per the statistics available, the city police registered 45 cases of motor vehicle theft within city limits against 121 cases reported in 2017. The figures showed that the number of motor vehicle thefts were higher than dacoity and robbery cases reported in the same period in Kochi.

Psychiatrist Dr C J John cited that the trend is very disturbing. “Basically this tendency stems from society itself. Mainly the teens are making money just to showoff,” he said. According to him, teens mainly involve in such activities when their families don’t provide them with the money to lead their kind of lifestyle. “The youth first steal from their immediate family, then their relatives. However, being labelled a criminal will affect him throughout his life. The remedy is to guide such youngsters well,” he said.