A narrative of human existence

As you make way towards gallery D located on the first floor of Durbar Hall Art Centre, you will encounter a symbol drawn on the floor with sand.

KOCHI: As you make way towards gallery D located on the first floor of Durbar Hall Art Centre, you will encounter a symbol drawn on the floor with sand. What looks like a large eye sits on top of a triangle below which is a shape that could either be a quasi boat or a mouth of a human. This sets the tone for Delhi based artist T K Hareendran’s ongoing exhibition titled ‘Shore of Alphabets’ where the cross-over between water and human is referenced through symbols.

The 38-minute video installation that accompanies the paintings is a montage of monochrome pictures taken by the artist of species inhabiting the bounds of the sea. Depicting mundane scenes from the coast of fisherfolk, vendors, visitors and marine life, the evocative film draws you in with its background score that is rhythmic and steady much like the tranquil ocean whose presence is ubiquitous in Hareendran’s work. As it progresses, you realise that these are not scattered images but a conjugate narrative of a sombre human existence. 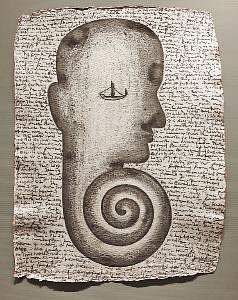 “The pictures you see in the video are my attempt to document daily activities on the beach. I took these photographs as a rumination on anthropological life, they are also an extension of my poetic reflexes and references as an artist. I also took inspiration from the silent movie era where the emphasis is only on the visual aspect.

At the same time, I was very keen on synchronising the photographs and the background score. The music that you hear is meant to invoke a memorial response that taps deep into the audience subconscious. I hope they are reminded of pain, sadness and departure,” says the Delhi based artist.

The memory of the shore is for Hareendran associated with a story which, in turn, is accessible in the form of language. “Language in its most elemental form is nothing but the alphabet sign and you will see this idea extended in my paintings,” he notes.

His canvases exude earth like quality, the reds and ochres indicate a profoundly Indian ethos with its profusion of thousands of language cultures. But it’s the dominant hues of blue and grey that highlight his preoccupation with the sea and water. Alphabets, letters, signs and symbols populate Hareendran’s art, some legible and some not but they are not meant to be read but rather meant to be seen, to be felt.

“The icons I have painted are not for phonetic reading, they are meant to be absorbed visually. Some of the alphabets are metamorphosising into objects of the ocean like a fishhook or an anchor or a boat,” the artist adds. In one painting, Hareendran has curled the neck of a human face to look like a shell while a boat takes the place of the eye. It is this amalgamation of man and his creations with the basal force of the sea that marks his art.