Last year, the Cochin Airport was closed from August 15 to August 29 as floodwaters inundated the runway and damaged nearly 800 runway lights.

KOCHI/ KOZHIKODE: The Cochin International Airport Ltd., which was shut down for 14 days due to floods last year, will not be operational till 9 am on August 9, as a precautionary measure, even as several flights were diverted during the day due to low visibility and bad weather.

“Kochi airport operation is temporarily suspended due to water logging in the apron area," a statement by the CIAL PRO said.

The airport apron or tarmac is the area of an airport where aircraft are parked, unloaded or loaded, refuelled, or boarded.

Flights were also diverted from the Kozhikode airport on Thursday. 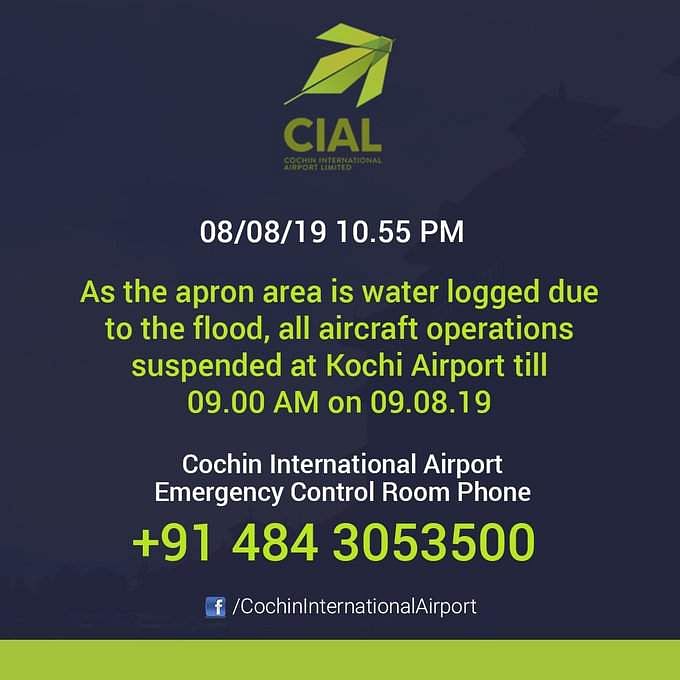 Due to the fall in air visibility to below minimum, flights from Gulf Air (260) ( Bahrain to Kozhikode), which was to land at Kozhikode at 4:30 am was diverted to Kochi. Etihad 250, (Abu Dhabi to Kozhikode) which was was to land at 4:45 am was diverted to Coimbatore before coming back at 9:16 am. Etihad 251 (Kozhikode to Abu Dhabi), which was scheduled to take off at 5:45 am, has been rescheduled to 12 am at night today.

Last year, the Cochin Airport was closed from August 15 to August 29 as floodwaters inundated the runway and damaged nearly 800 runway lights.

The Kerala State Disaster Management Authority (KSDMA) has issued an emergency helpline number ‘1077’ for people in the state.

Now we are on Telegram too. Follow us for updates
TAGS
Kerala rains Kerala floods Cochin Airport