People are yet to come out of the depression caused by last year’s flood; they recall the church building collapse that killed six persons

KOCHI:  AS nature’s fury has hit Kerala once again in the form of flood and landslides, a deluge of memories envelopes villagers of Kuthiathode. Today, even the slightest sound makes them jump with fright. As it makes them remember the frightening long cold night of August 16, 2018. Though a year has passed, people are yet to come out of the anxiety and depression caused by the devastating flood. They are still mourning the demise of six persons who were killed after a building on the St Xavier’s Church premises collapsed in the flood.

Now when they read the news reports of the Kavalappara landslide, where many bodies are still buried under the debris, the residents of Kuthiathode say they can easily relate to the trauma of the people living there. “Can you imagine the emotions we underwent?” asked Varghese Kalkkuzhi, a resident of Kuthiathode. “We knew six persons were under the debris. There was nobody to help us. The last body was taken out four days after the incident. When we heard the news about the landslide at Puthumala and Kavalappara, the pain flooded back,” he said. 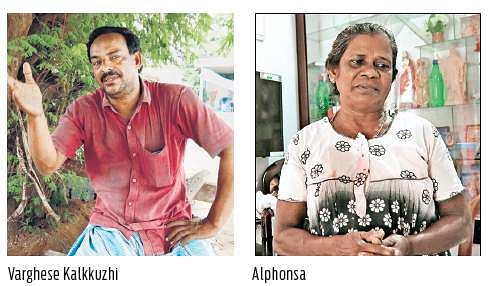 Like Varghese, almost all residents here still live with grief and hurt. Those who survived last year’s flood which almost drowned the Kuthiathode village remember the incident.The flooding started on August 15 morning. The water level increased soon, forcing the residents of the small village to take refuge in the St Xavier’s Church building. The 200-year-old structure doubled up as a relief camp for nearly 120 people.

The next day, the water level rose alarmingly, forcing them to move up to the second floor. At 6.55 pm, when six persons were sitting on the corridor of the second floor, it collapsed. The rest of the people were in the adjacent hall.

“I was sitting on the second floor. Suddenly I felt like a portion of the corridor collapsing. In a hurry to save my life, I alerted my brother who was sitting next to me. Both of us jumped to the other side and went down the old wooden stairs. I heard the cries and screams of people for a second. I was helpless. I jumped into the water and swam to the main church building. The water was more than six-foot deep in the church compound. The collapsed debris had formed a huge heap then,” remembered Poulose Payyappilly, who had a miraculous escape.

The local people, using ropes and other equipment, finally rescued the people in the building and moved them to a safe spot. However, they were not able to recover the bodies of six men -- Kochouseph, Jomon, Paulose, Xavier, Panackal James and Shauriyar. The rescue team arrived only after three days. “They recovered two bodies on August 18 and the remaining four the next day. All those days, we were walking through the water under which our dear ones were lying including my brother James,” remembers Jimmy Panackal with a heavy heart.

‘May God help landslide victims’ kin’
Praying to God to give strength to the survivors of Kavalappara and Puthumala landslides, Alphonsa, who lost her husband Shauriyar in last year’s church mishap at Kuthiathode, said people sometimes become really helpless when the nature’s fury strikes.  “We experienced the same last year. I knew my husband was under the debris. He had been lying under the water and mud there for four days. There were other five men too in the debris. All their relatives were there, along with me, who were also equally helpless. That incident, in which the entire village cried for the six people, further united us,” said Alphonsa with tearful eyes.

Kochi: Considering the havoc unleashed by the flood last week and suffering of the flood victims, the inauguration of the renovated St Xavier’s Church at Kuthiathode has been postponed.  Earlier, the church authorities had decided to conduct a function on August 15 to pay tribute to the six people who lost their lives in the building collapse on the church premises. The old structure which had partially collapsed last year causing their death was razed.  “St Xavier’s Church was renovated. It was actually scheduled to be opened on August 15. However, considering the incessant rain, we have postponed the function. It will be opened in another 10 days,” said parish vicar Fr Kurian Kattakkayam.

Residents of Kuthiathode said though they have been getting heavy rain this year too, they are more cautious. “Most of them have moved to safe places and relief camps to avoid any mishaps during the rain. The water level has also not increased alarmingly this year,” added Fr Kurian.

Now we are on Telegram too. Follow us for updates
TAGS
Kuthiathode landslide Kerala floods