Tracing the faultlines of flood and fury

In his riveting and timely book, ‘Flood and Fury’, journalist Viju B explains the reasons behind the floods of Kerala in 2018 and now

KOCHI: Viju B likens the Western Ghats to a woman -- Idukki as the head, Pathanamthitta and Kottayam districts as the body, Kuttanad as her fertile feet, and rivers as nerves and blood vessels.“What happens when the nerves and blood vessels are clogged?” he asks. “Hemorrhages occur.” Viju doesn’t wait for an answer. “This is what precisely has happened in 2018 when Kerala faced its worst floods in 100 years.”

As the state battles yet another flood and destruction, warnings by Viju’s just-released book ‘Flood and Fury’ becomes prescient, a prophetic alarm of sorts. “The Kerala floods might be a trailer of the grimmer things to come. We have pushed too many boulders down hills and the next big disaster might leave us with nothing but ruins,” he writes in the introduction. While writing the book, Viju, a veteran journalist who travelled across the flood-hit regions last year, did not expect the disaster to repeat the very next year as well. 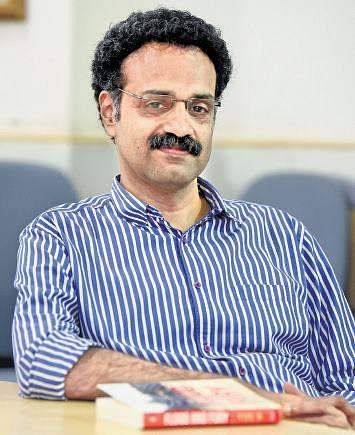 ‘Flood and Fury’, published by Penguin Random House India, explores the causes for the huge catastrophe last year. It investigates why the Sahyadri – meaning the benevolent mountains before the Britishers named it the Western Ghats – turned hostile over the years.

The narrative is weaved through the lives of numerous characters living in Sahyadri’s bosom, who pursue their aspirations, many a time cocooned in their prejudices, insecurities, faith and greed, while a very few protect her lifelines (rivers and forests) for posterity.

“There were two main reasons told to us by the government for the 2018 floods; one was the heavy rainfall, about 2400 mm rainfall; and the other was the delay in opening the dams. The Central Water Commission said it was not because of the dams, and the flooding happened due to the unprecedented rains. In May, we had the amicus curial report, which said the flooding happened due to the delay in the opening of the dams. We had two conflicting reports, and people are very confused about what is the real reason behind the floods,” he says and adds that the truth lies somewhere in between.

Both contributed to the floods. However, the primary and the fundamental reason is the “multiple haemorrhages” in the Western Ghats, says Viju, who has covered the 26/7 Mumbai floods, exposed the Sindhudurg mining scam in the Western Ghats and the 26/11 terror attacks in his over two decades in journalism.

He reminds that during the entire period of the 2018 floods and the post-flood activities, one word, or rather two words, that were missing from the narrative was ‘climate change’. “No policy maker or anyone from the government used the word ‘climate change’, which is quite surprising and saddening,” Viju says.

The book, one of the most extensive studies on the ecological damage caused in the region, is divided into 11 chapters - Idukki, Pathanamthitta, Kuttanad, Chalakkudy, Palakkad, Wayanad, Kodagu (Karnataka), Bicholim (Goa), Sindhudurg (Maharashtra, and one on ‘Why the hills are coming down’ (very relevant when Kerala has seen several hills coming down this year – in Kavalappara, Malappuram; and Puthumala at Meppadi, Wayanad) and one entire chapter is devoted to the Western Ghats titled ‘Sahyadri: A wake up call’.

A well-researched book, Viju also begins each chapter – except the last two – with a tribal song from the area, just to remind all of us of the real owners of the fragile Western Ghats; who opened their homes and hearts to provide food and shelter to the author during his research.

Viju’s book is not just a non-fiction one, it is also a ready reckoner for researchers, who would want to find the faultlines for the ecological disaster happening on the Ghats. Is there any hope? Viju writes that he has come across numerous inspiring stories by lone rangers who are doing wonderful eco-restoration work and organic farming without any government support. But, these are just drops in the ocean, and unless the government steps in to stop all mindless construction and deforestation, the flood and its fury will continue year after year.

Now we are on Telegram too. Follow us for updates
TAGS
Kerala floods Viju B