People, whose source of livelihood was farming, were just coming back to normalcy after last year’s flood, when nature let loose her fury once again

KOCHI:  Nature’s fury has once again dealt a heavy blow to farmers in the district. People, whose mainstay of livelihood was farming, were just picking up pieces of their lives and coming back to normalcy post the flood of August 2018, when mother nature let loose her fury once again, devastating them in the process. 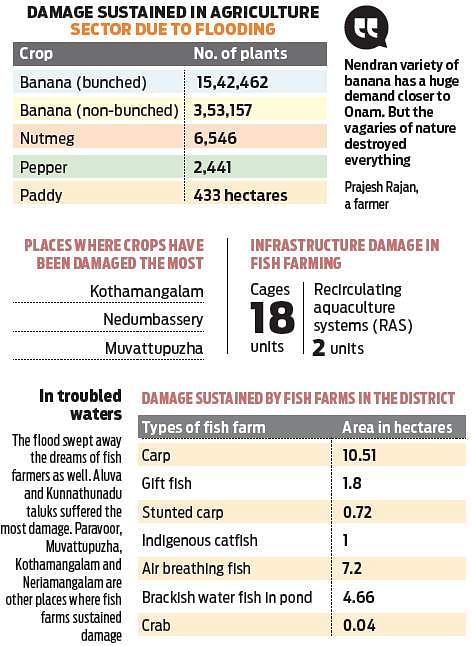 According to Prajesh Rajan, a farmer at Kothamangalam, high winds and heavy downpour destroyed his banana crop. “The crop was doing good and I was expecting a bumper crop for sale during Onam season,” he said. However, all that remains of his crop are toppled banana trees and immature fruit bunches.

“Nendran variety has a huge demand closer to Onam as they are used to make banana chips. But the vagaries of nature destroyed everything,” he said. According to Anita James, technical assistant, District Agriculture Office, among crops that got destroyed in heavy rain and winds, banana plantations were the most hit. “Around 15,42,462 number of bunched banana crops and 3,53,157 number of un-bunched banana crops were destroyed,” she said.

“Of course, some of these immature raw fruits can be salvaged. But it won’t get the price it would have otherwise fetched,” she added. According to her, besides banana, paddy crop too suffered damage. “But they are in a submerged condition and a correct figure can only be arrived at later. At present, the figure of loss stands at 433 hectares in the district,” said Anita.

Among spices, nutmeg and pepper suffered the most damage. “As of now, it is estimated that around 6,546 acres of nutmeg and 2,441 acres of pepper plantations have been affected,” said Anita. According to her, the areas that suffered most damage in agriculture sector are Kothamangalam, Nedumbassery and Muvattupuzha. The case of Pokkali rice too has been really bad this year. “First, the lack of rain during sowing season, then the deluge, all severely affected Pokkali farmers,” said Anita.

Fish farmers too hit hard
The flood swept away the dreams of fish farmers as well. “Both infrastructure and crops were damaged in the flood,” said Devu Chandran, extension officer, Fish Farmers’ Development Agency. According to her, Aluva and Kunnathunadu taluks suffered the most damage. “Paravoor, Muvattupuzha, Kothamangalam and Neriamangalam are other places where fish farms sustained damage,” she said.

Besides crop loss, 18 units of cages used for cage fish farming and two recirculating aquaculture system units too have been damaged. “In comparison, crops sustained more loss than infrastructure facilities. Fish got killed due to variation in pH levels of water and an increase in turbidity following flooding,” she said.