Onam gift by Kochi Metro getting ready: Ride up to Thykoodam

However, the Kochi Metro Rail Limited awaits for the confirmation from state and Central governments before announcing the date of launch.

KOCHI:  The Kochi Metro is getting ready to present the city a perfect Onam gift: Extension of service till Thykoodam.Work is fast progressing on the five new stations - Ernakulam South, Kadavanthra, Elamkulam, Vyttila and Thykoodam — with each displaying a theme. It is learnt the Kochi Metro Rail Limited (KMRL) authorities are waiting for the confirmation from the state and Central governments before announcing the date of service-extension launch. 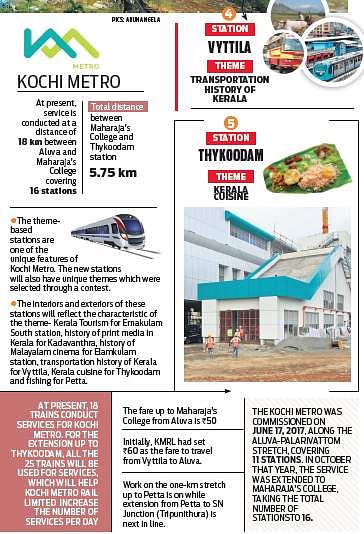 Presently metro trains run from Aluva to Maharaja’s College station.“The load test using trains was conducted on the new stretch. Work on the stations is in the finishing stage,” said a Delhi Metro Rail Corporation source.Hardware installation of the signalling and telecommunication system has also been completed.“The software is yet to be installed. Once it is over, automated trial run will be conducted. The railway safety commissioner’s inspection will follow,” said the officer.

Alstom, the French coach manufacturers for Kochi Metro, delivered one more train last week, taking the total number it has supplied to 25. At present, 18 trains are plying on the Aluva-Maharaja’s route.Once the service is extended up to Thykoodam, all 25 trains will be used, thereby also increasing the number of daily services.

The Kochi Metro was commissioned on June 17, 2017, along the Aluva-Palarivattom stretch, connecting 11 stations. In October that year,  the service was extended to Maharaja’s College, taking the total number of stations to 16.As per the data provided by the KMRL recently, nearly 2.5 crore passengers have used the Kochi Metro so far. The average daily ridership of Kochi Metro now stands between 40,000 and 45,000. During holidays, the ridership is estimated between 55,000 and 60,000. With the service extension, the KMRL is planning to increase it to 75,000 per day.

Meanwhile, work on the one-km stretch up to Petta is on while extension from Petta to SN Junction (Tripunithura) is next in line.Two elevated stations (Vadakkekotta and SN Junction) and a two-lane bridge across Panamkutty River are the major task involved on the stretch.The KMRL has also chalked out a plan for a Phase II, which will run up to Kakkanad, mainly keeping the Infopark in mind.