KOCHI: Following the resumption of Vyttila flyover construction, the structural engineering team from IIT-Madras on Saturday concluded the two-day inspection of the site as part of its in-depth tests.

The four-member expert team performed an ultrasound test and collected concrete samples for the core test. “Our team has collected the samples and will soon resume the tests,” said B Nageswara Rao, who heads the IIT-M structural engineering team.

The team is also slated to conduct an ultra-sound test and collect core samples from Kundannoor flyover on Monday to ensure the quality standards.

The Public Works Department (PWD) initiated the scientific tests in the backdrop of the Palarivattom flyover developing surface cracks within two years of its opening.

The Cochin University of Science and Technology’s, which conducted its preliminary inspection of Vyttila flyover, is expected to complete its core test by next month.

The university has outsourced the sample collection to an agency and it will collect the core samples soon. However, incessant rain has delayed the process, said officials. 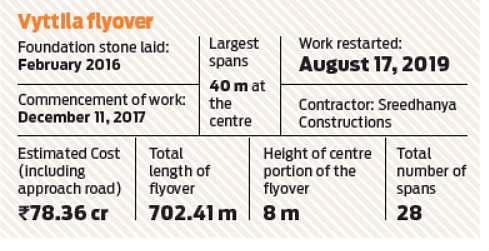 Meanwhile, Sreedhanya Constructions, the contracting firm, is hopeful of speeding up the work following the state government’s decision to lift the temporary ban on quarrying on Wednesday.

“As the government move ensures a smooth flow of gravel and other necessary materials for the concrete work, we will be able to construct the spans before the stipulated period,” said an official of the firm.

With the intervention of PWD higher officials, the remaining dues are to be settled soon.

“We have been asked to submit our pending bill as part of the revised estimate. We are hopeful of obtaining the remaining amount soon,” he said. Meantime, the approach road work is also progressing fast.

“We have almost completed the approach road to the flyover from Alappuzha side,” added the official.

Core test
It is a unique tool for the safety assessment of existing concrete structures by running compression tests on the concrete core drilled from the concrete surface.

Ultrasonic testing of concrete assesses the strength of concrete, discontinuity in cross-section and the depth of surface cracks.

Now we are on Telegram too. Follow us for updates
TAGS
IIT Madras Vyttila flyover